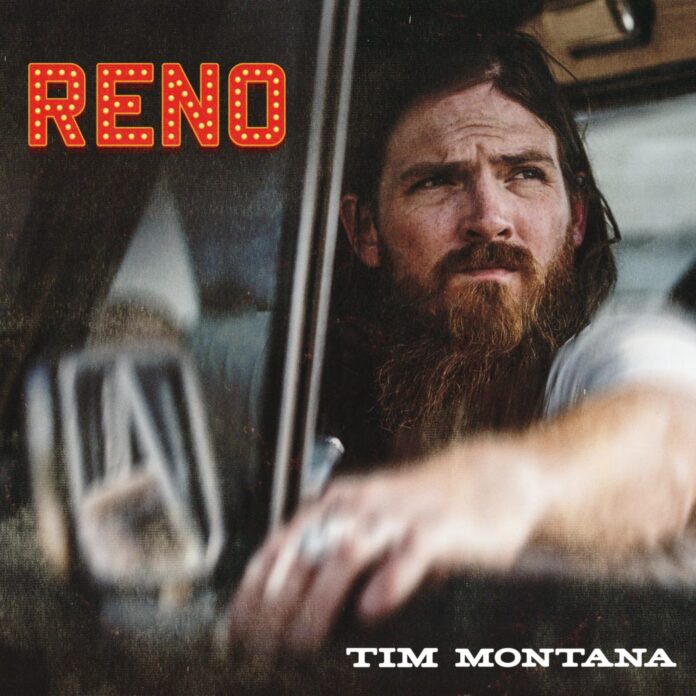 The modern country star has – by and large – a few settings for their songs. A girl has left them, so they are in a bar, or they are in the house with a girl. Sometimes at the beach with their buddies, and occasionally hunting, or fishing. And they are almost always driving down the backroads in a truck with George Jones playing on the stereo.

That’s all cool, by the way, good lord, I listen to more country than almost anything these days. However, meet the yin to that yang.

Tim Montana reckons that for “Reno” he and the band “lit the rulebook on fire and just went for it, focusing on creating music that was true to me.”

His upbringing was very different to mine, that’s for sure. According to the bio that came with the EP, he was raised in a single-wide without electricity in the wilds near Butte, Montana and worked cleaning kennels, frying chickens, operating a carousel, being a ranch hand.

All of which means “American Dream” is less the “little slice of Kentucky heaven” that permeates these things, he’s not married the prom queen, as much as he’s knocked up the girl at the Dairy Queen. As such there’s a grit and a dirt under the fingernails that is seldom in records like this.

It’s not shy of being southern rock either. “A Guy Like Me” is more Black Stone Cherry than the Man In Black, but its real, and its superb. The title track is drenched in Harmonica, “don’t need no postcard town” goes its first line, and it’s a world away from the Jason Aldean’s and the arenas. This is – and I quote “fucked up in Reno”. And pretty unapologetic about anything.

“Stoned On You” is as close as this gets to conventional. He’s stoned in a bar, but he’d rather be at home with the girl. There’s a kind of Kendell Marvell vibe here, and the solo that appears out of nowhere is so well done.

“Real Good People” is probably the most autobiographical, you’d imagine. Colby Calilatt’s harmonies and verse take this into other realms, “raised on four letter words, but we’re salt of the earth,” the pair sing, and that sums up the vibe throughout.

There’s a sense of fun too. This is underlined by the presence of TuPac Shakur’s “California Love”, the rapping here would make Kid Rock nostalgic for the old days and let’s just say any time Billy F. Gibbons is on a song is better than any time when he isn’t (Matt Sorum is on this one too).

That almost proves that Tim Montana isn’t like anyone else, and “Reno” is not cut from the same cloth as the rest. This is rough and ready, but its rock n roll, and its glorious.