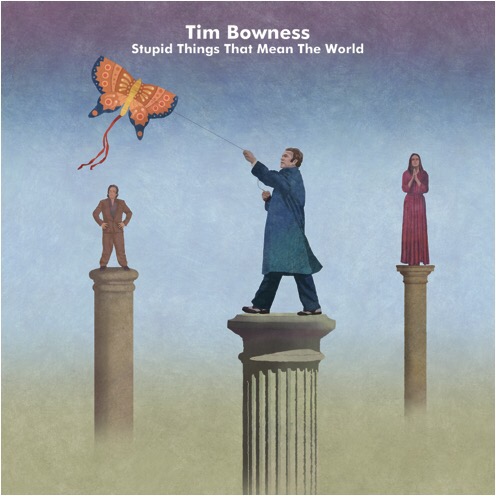 Tim returns with a rather impressive, eclectic new release

Perhaps best known for his work in No-Man with Steven Wilson, Tim Bowness proved with last year’s “Abandoned Dancehall Dreams” he was a fine soloist in his own right, in common with that work, there is a feel about “Stupid Things That Mean The World” that is akin to this being the soundtrack to a film that is playing in the composers head.

The fact is, though, it doesn’t really matter what the ingredients are, it’s all about the taste. Happily, then “…..Mean The World” lives up to its collaborators.

A largely restrained, lilting, thoughtful work, opener “The Great Electric Teenage Dream” is very much the overture, sounding not unlike Steven Wilson it builds to a fine crescendo, leading neatly to “Sing To Me” a piano-led, lush sounding track with a kind of haunting feel.

It’s also an eclectic thing, the title sound is almost funky, and the brilliant “Press Reset,” with its stark electronica, is a real jolting highlight. Juxtaposing this most pleasingly are the gorgeous acoustic works that permeate throughout. “Everything You’re Not” is a superb example of this, while “Know That You Were Loved” comes complete with one of 2015’s oddest lines, talking about “crumbling cupcakes of love” over a type of 10CC harmony.

“Everything But You” features some fine flute, and the warm, summery classical feel of “At The End Of Holiday” makes for the perfect closer, and musically is at odds with the darkness of the lyrics. Actually, that is something that “STTMTW” does well. Lyrically it feels you aren’t coming in at the beginning of the story, but instead are getting a window into the characters lives, allowing you to add personal interpretation to the songs.

An interesting, brave, bold and yet understated collection, “Stupid Things That Mean The World” pulls off its aims with ease. Worthy of investigation, and there aren’t many records like this one.