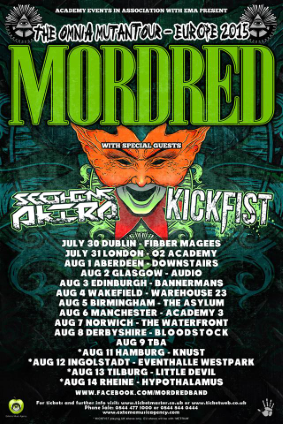 UK tour with Seething Akira and Kickfist. And MVM will be the Birmingham gig.

Following on from their triumphant and long awaited return to these shores last year, one of the late great John Peel’s favourites MORDRED return for a summer tour across the UK and with some extra dates in Europe, supported by high energy alt rockers SEETHING AKIRA & Kickfist.

Mordred:
“..this is a massive performance…highlights, though, are the raptastic Esse Quam Videri and a stunning cover of Thin Lizzy’s Johnny The Fox Meets Jimmy The Weed. But the whole occasion is simply a joy. The atmosphere, the musicianship, the song choice… it all works. And Mordred’s combination of metal, funk and hip-hop sounds convincingly contemporary”
Malcolm Dome, Metal Hammer

Seething Akira:
“This quartet breathes new life into an increasingly growing underground scene….. hooking beats like The Prodigy and a unique style like Enter Shikari, this band create something personal but show the ability of becoming front runners in an ever growing popular genre!”
Soundscape Magazine

Mordred blazed a rip-roaring trail across both sides of the big pond back in ’89 with their superb debut ‘Fools Game’, it’s taken a couple of decades to get them back in full gear again but with their single The Baroness out & a new EP pending, it’s a very exciting time for fans, both new and old alike, of this uniquely innovative bunch of San Franciscan reprobates!

Seething Akira release their blitzing new single AIRSTRIKE on July 27th, just in time for the tour and it’s available to download for airplay now.