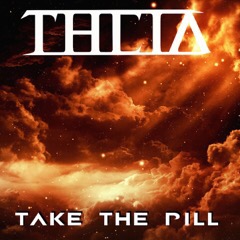 That night, in the spirit of honesty, MV was there to watch Fire Red Empress. They played, and they were excellent, then Theia came on, and you probably had to be there, but if you were, you couldn’t not have been impressed with the trio as they played hard rock with all the bluesy swagger of Aerosmith and the modern crunch of Heaven’s Basement. Even more astounding they’d got a new drummer too, nerves? Don’t be silly.

Fast forward to now, the interim has seen Theia get rather acquainted with the motorways and small venues of Great Britain. They’ve been to Ibiza with Hard Rock Hell, they’ve been on the New Rock Show on Planet Rock (and rather less auspiciously – although with plenty of skill – they headlined an MV showcase night in Nottingham) and somewhere in amongst that, they sound the time to record a debut full-length record out.

The challenge for the three piece is quite simple. Can they transfer those brilliant live performances into the studio? The answer is unequivocal: hell yes.

To be fair, it was never really in doubt, but even if it was, then the fact that four of “…..Pill’s” 10 tracks had already appeared on their EP from a couple of years ago. Two of those songs bookend the record and in many ways “We’re Alive” and “Whoop De Fucking Do” sum up the band.

The former bowls in like it owns the place and let’s everyone know it’s arrived and cuts a celebratory tone, almost saying “you’ve got one life, live it”, while the latter – still played at the end of those aforementioned live shows – is a simple boogie, but it’s one that gives life to the bands more acerbic side, given that it’s a pretty damning indictment of “celebrity” culture.

But it’s the new songs that show this is a thing with legs. It’s one thing, after all, to write four good songs. It’s another entirely to write 10. “Some Days” is absolutely the pick. The best thing on offer it is nothing more and nothing less than a classically timeless piece of rock n roll. Hooks and a chorus are a given, as is superb work from singer/guitarist Kyle Lamley, but when it all comes together like it does here, Theia are unstoppable.

It’s far from the only great track here either. “Ride On” – which gets bonus points for building itself on the back of a mighty Paul Edwards bass groove – is the type of thing that The Answer do or Black Stone Cherry did before they decided to go all middle of the road, and it’s pretty easy to imagine the big ol’ riff of “Society On Mute” inducing action in crowds at a festival somewhere – anywhere.

There is a refreshing lack of pretension about “Take The Pill” it actually sounds like the sort of record that the men who made it might listen to. At no point on it do Theia even attempt to be anything they aren’t. Even the ballad “Electric Witness”, which takes on religion and wins, sounds totally natural. Elsewhere “Overthrown” has a kind of heavy metal gallop, but it’s understated opening line of “I don’t want to conquer the world” is at odds with its brash sounds.

We’ve said before on this website about bands who complicate things with 101 (mostly) nonsense sub genres. Theia aren’t that band. Theia are the band you always thought they were. And good, honest rock n roll is in fine health as long as this Pill is the medicine.

Previous article
Rubbing Salt Into The VVovnds
Next article
Wo Is Them. Ripples Of Fat