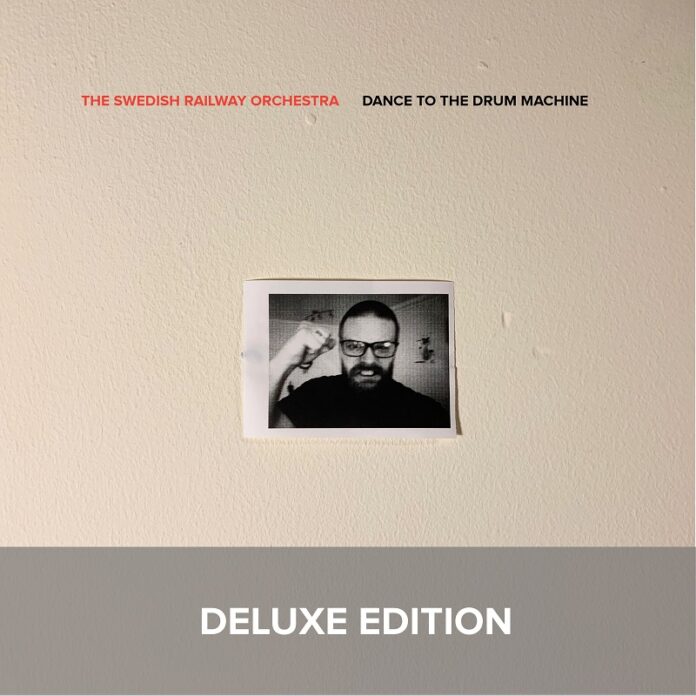 Blowtorch Records is an independent record label based in Galway on the West coast of Ireland. They offer an online home for an eclectic and diverse range of Irish bands and artists and those further afield. The label has been tagged as The Future Sound Of Ireland. They released an album earlier this year by The Swedish Railway Orchestra, which is the brainchild of Dublin musician and producer Rob Smith. The album `Dance To The Drum Machine` sadly passed me by but despite my oversight as luck would have it they have just released a deluxe version with an additional fifteen tracks and now includes the original album plus b-sides, demos, and some new tracks.

The original album included `The Ballhaus` which i`m led to believe is a space to play tennis. This track is delightfully hypnotic with vocals gently shared atop and throughout. The additional version includes an instrumental demo which will have you drifting off as you listen to it, Delightfully ambient. `We Go Like This` is a number that I found quite spellbinding with it`s constant drum machine beat and vocals that really draw you in. The deluxe version contains a single edit of the track which seemed to have a richer synth like beat.

`Fallen Devil` has a real soulful vibe and I wouldn`t have been surprised if somebody had said it was a new Moby track. The deluxe offering includes a brief demo of the track which is a really interesting take and also a single edit which to me gave it a kind of disco come Blondie `Heart Of Glass` vibe.

`Dirty Papers` seemed to grow as it came to life with questioning vocals that were almost spoken word sprinkled over this addictive encircling under beat . The demo version included on the deluxe edition is far shorter and has a slightly harder edge to it with a clanging percussive tapping that was quite rightly, in my opinion toned down on the album release.

`I Funded This Inferno` was a really interesting listen which included lyrics that were shared in Italian, French, German, and English along this bass driven electronic journey. The demo version on the extra disc is longer and has a much more drum driven beat with harmonies on the vocal delivery.

`Stop Acting Like Bill Drummond` moves at a rapid pace and has a nigh on EBM tinge about it. it seems to be a viewpoint on William Ernest Drummond the Scottish artist, musician, writer, and record producer who was also the co-founder of late 1980s avant-garde pop group The KLF. The number closes out with what I assume is a fleeting segment of the man himself.in conversation.

`Mother’s Little Helper` has a constant beat that allows probing slightly disturbing vocals to float above the soundscape. We are a third of the way through `In League With The Devil` before we have some quietly shared vocals that give the track a slightly unsettling texture. The expanded version includes `In League (Reprise)` which is just what it says on the tin and short recap or flavour of the released version.

It may be me but `Dance To The Drum Machine` put me in mind of Lipps Inc`s 1980 hit `Funkytown` with its synth beat and groovy quality. I loved the addition of the female vocal and a kind of reference to Joy Division`s `Transmission` in the title strap line that is shared in the latter section but aimed at a drum machine and not a radio this time. Genius.  There`s an anthemic pounding thumping sound to `Go` (vinyl version) which halts for a few seconds before returning with a much more drum and bass led interpretation for the last sixty seconds or so. The demo version included in the additional tracks is almost unrecognisable but equally as captivating as the vinyl composition.

We have additional tracks that are exclusive to the deluxe version with `Angels With Dirty Faces` which rolls in and along with an enticing relaxed chilled dance vibe and lyrics that may well be about getting or being high. We have a delicious, dreamy electro presentation  in `Black Magik Devil Woman` which has layers of synth that repeatedly hit you like waves on a beach.

The wonderfully titled `Book The Engineer (I’m Going On My Holidays Tomorrow)` is a real curious submission with rolling synth and drum with harmonised vocals that are distantly dusted over the  rhythmic backdrop.

`Half And Half` is a wonderful electronic earworm with vocals that sound quite dreamy but become unsettlingly enticing on this piece. I read that `Mickey Money` is Wicklow slang for the monthly  government  money a parent receives to help with the financial burden a child brings. The track is a brilliantly psychedelic opus. A real trippy piece with bongos and off kilter synth like organ echoes.

I had a wry smile when I read the title of `Ode To Those Arrested At Music Festivals In Ireland` a track that`s quite spacy and out of it. There`s a fairly EBM grain to `The Routine` which moves at pace as lyrics question as to why the narrator continues with their tedious regime.

I have to say I was blown away by `Dance To The Drum Machine` and with so much post-punk flowing out of Dublin`s fair city these days it was refreshing to listen to something that needed more of a contemplative mindset. I may be wrong but to me The Swedish Railway Orchestra blended influences from artists such as Talking Heads, Was Not Was, Alabama 3, VNV Nation and Primal Scream. My wife even chipped in with Tones On Tail as she passed when I was listening.

The deluxe  edition of `Dance To The Drum Machine` is nearly ninety minutes of irresistible aural pleasure .

I would recommend purchasing a copy and as a slight pun on counterculture`s sixties era guru Timothy Leary, take his advice and “Tune in, turn on and chill out!”