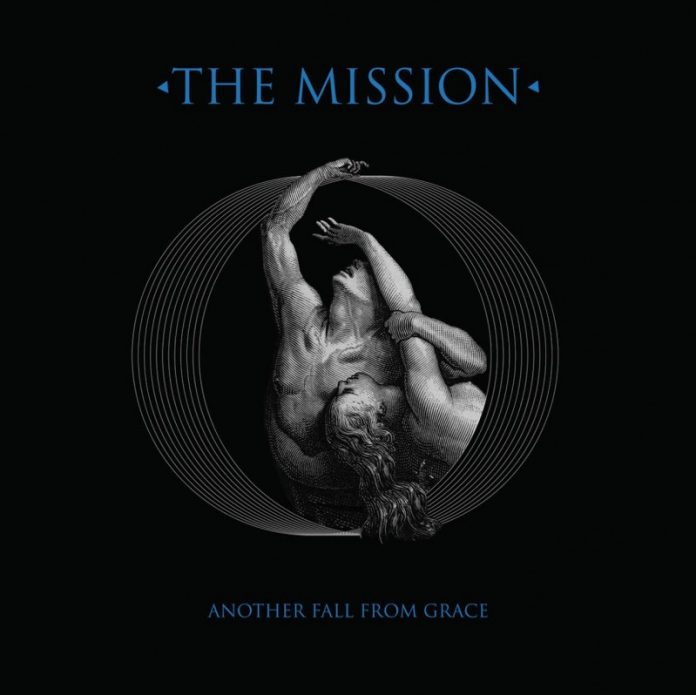 The UK’s premier merchants of gothic rock have returned and celebrate 30 years with a brand new album.

It would have been impossible to predict 31 years ago that the departure of Sisters of Mercy duo Wayne Hussey and Craig Adams would lead to the formation of one of the most influential bands of the past three decades.

Since their 1986 debut album God’s Own Medicine Leeds overlords The Mission have been on a, erm……mission, to bring their brand of gothic rock to the masses.

Mainman Wayne Hussey’s stated aim for the album was to create the missing link between the Sisters Of Mercy’s First And Last And Always and The Mission’s debut album God’s Own Medicine.  There are certainly tracks on the album that feel like a continuation of the Sisters vibe and direction and more than hints at what potentially could have been had Hussey and Adams not departed the band.

The title track “Another Fall From Grace” starts the album off in classic fashion.  It’s easy to transport yourself back thirty years to the beginning of it all and get yourself lost in the melodic maelstrom.

The delightfully melodramatic “Met-Amor-Phosis” is a fine example of this with its darkly melodic tones being pushed forward by the iconic jangly twelve string guitar and driving rhythm section.  The track is in part influenced by the death of David Bowie and part autobiographical.

Tim Palmer is back to handle production duties and it is a welcome return for the multi-talented  producer/mixer and his skills are evident in recapturing the classic sound from the 1980’s.

“Blood On The Road” is an outstanding track that starts in typical mid-tempo fashion before unleashing a emotion-fuelled chorus.

There are high profile cameo’s a-hoy on this album.  HIM’s Ville Valo, Gary Numan, Martin Gore to name but a few.  All guests have added a touch of class to an album that needs no extra gloss.

“Tyranny of Secret” has an energy and vibrancy and along with “Bullets and Bayonets” has a haunting quality that has been found in many of the band’s previous tracks but here sounds a little bit more like you are being pulled into their world rather than being an observer.

Vocally Hussey is as good as he has ever been.  However, he somewhat cut himself off in order to make this album as pure and as immediate as he could.  As the man himself has stated “This is a dark album although I didn’t set out with that intention, it’s just the way things unfolded. I know I did go a little crazy and even a little paranoid during the recording of this album”.  The emotional journey is certainly laid bare for all to hear on this album.

The spoken word track “Valaam” adds an edge of poetic narrative before the album closer “Within The Deepest Darkness” plays out the final beautifully crafted melodies.

This is an album that proves the band are as vital as they have ever been.  In the constant shape-shifting world of popular music trends will come and go.  Class is permanent.

Another Fall From Grace is out now.