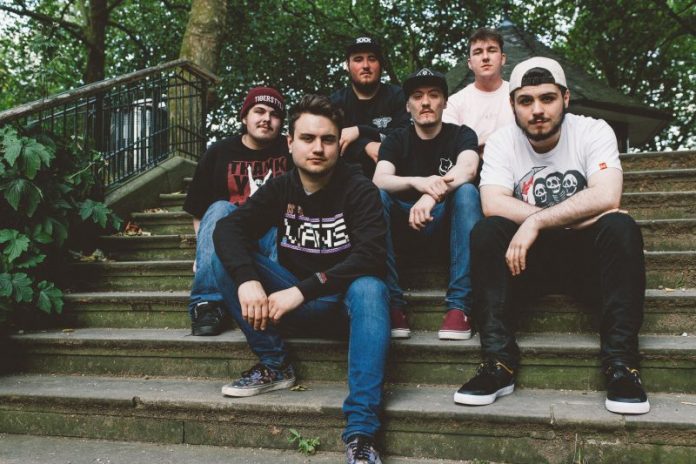 Oxford Pop Punk Sextet Better Than Never are pleased to reveal details of their forthcoming EP, ‘Head Under Water’, which will be released via Fox Records on December 2nd. Vocalist James Harris says of the record: “Head Under Water covers the idea of how dealing with depression and anxiety can sometimes just feel like you are drowning in a sea of hopelessness, the ball and chain in the imagery showing how you can feel chained down by those struggles and anchored at rock bottom.” Serving as the follow up to February’s debut Homemade Hero, you may recognise the superhero character taking centre stage on its cover, which Harris reveals “represents the concepts of coping, even when it seems you’re about to drown, in a more literal sense.” The band are also streaming the appropriately named lead single ‘Learning To Swim’.

Completed by vocalist/guitarist Will Keating, guitarists Max Peniket and Jim Allsop, bassist Jake Aitman and drummer Alex Hinton-Smith, Better Than Never decided to take maximum advantage of their girthy line-up during the writing process. With the return of their original drummer Alex who “just made every element of the EP feel a lot more natural and together”, the members sat down as a group and worked together on every track for several months, trying to perfect every aspect. As James recalls, “We didn’t hesitate to pull something we’d written apart, even if we were happy with it, just so we could find tiny ways of making it more unique and stand out.” The same was true for lyrical content, with these having to obtain every member’s seal of approval, in order to achieve “a more mature and meaningful step-forward”.

The result is an EP jam-packed with hard-hitting layers: the dual vocalists are used to maximal effect, triple stacked guitars cleverly interplay and the lyrical content delivers a punch to the feels. Harris explains: “With this release we really wanted to pour our hearts into the lyrics, we spent time sitting down, and discussing issues and ideas that really affected us. For some of us this was recent happenings in politics, for others it was struggling with resurging depression and anxiety, and for Will it was dealing with Newcastle’s relegation from the premier league (forever the joker he is).” ‘Head Under Water’ also sees the band voyaging into new waters, with unexpected moments of aggression, meaning they appeal equally to fans of Blink 182 and Sum 41, as they do to the likes of Stick To Your Guns and A Day To Remember.

Recorded with Ian Sadler at Emeline Studios, following extensive research and approval of his work with their pals in the scene, such as ROAM, Coast To Coast and Homebound, they knew he was the right call for the project: “He was hugely passionate about our genre and he really took time and care in crafting our EP.” But ultimately the location was the winner: “The seaside was a ten-minute drive away, we had our fair share of on the beach football matches, terrible camping experiences and beachside amusement arcades during our stay.” And speaking of their pals in the UK pop punk community, BTN continue to team up with them for weekenders, including these currently announced shows:
23rd October – The Exchange, Bristol | 24th October – The Sunflower Lounge, Birmingham | 25th October – The Wheatsheaf, Oxford | 29th October – Record Junkee, Sheffield | 30th October – Maguires’ Pizza Bar, Liverpool | 13th November – River Rooms, Stourbridge