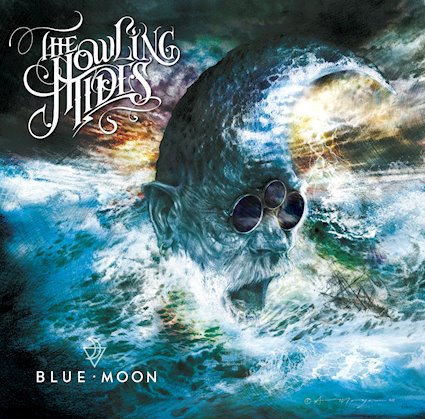 Back in June 2018, I reviewed the debut EP by The Howling Tides. In the conclusion to the review I wrote this: “Recently I’ve reviewed a few of the new breed of British rock. Allow me to humbly suggest that this mob might be the best of the lot.”

The truth is, a lot of that so called “New Breed” have rather stalled. I saw THT open for Inglorious in the autumn the following year. It seemed that Nathan James; mob were ready to be the next arena rockers back then. Even allowing for the pandemic robbing everyone of two years, its only really Massive Wagons and Stone Broken that have reached that mythical “next level” that football teams always yearn for.

All of which meant that “Blue Moon” was rather more highly anticipated than it might have been, given how good the debut was, and how desperate people are to see more of the underground make the breakthrough.

And, right in the heart of it – both literally and metaphorically – is a statement of intent. “Fortune Never Favoured Me”, is an almost seven minute thing. A blues-infused ballad, of such maturity and skill that if you were wondering where they’d been, then the answer is probably locked away honing their craft.

If that is the standout – and it really is – then there’s a mark of class throughout it. “Thalia” the lead track and first single grooves, massive great chunky grooves, but the way the solo is delivered convinces you this isn’t your normal “classic rock” rehash. Nope, rather, its got a Tom Morello thing going on, as if deliberately to set them apart.

“Cut Your Losses” does have a touch of the aforementioned Inglorious about it, but there’s an undercurrent of anger. “I am setting fire to everything you own” sings Baynes, “torch the neighbourhood” goes the hook. If you live by them, be wary, I guess…..

The improvement in songwriting is everywhere you look, not least in the way the title track bides its time before exploding, and there’s even a touch of Sabbath in it’s sounds, while the recently released single “White Crow” would, if it were a Black Stone Cherry song, see Chris Robertson adding another gold disc to his downstairs toilet wall.

Five more songs to get excited about, yes, but its more than that. Instead “Blue Moon” is the sound of a band that has moved from “loads of potential” to “very, very good indeed.”