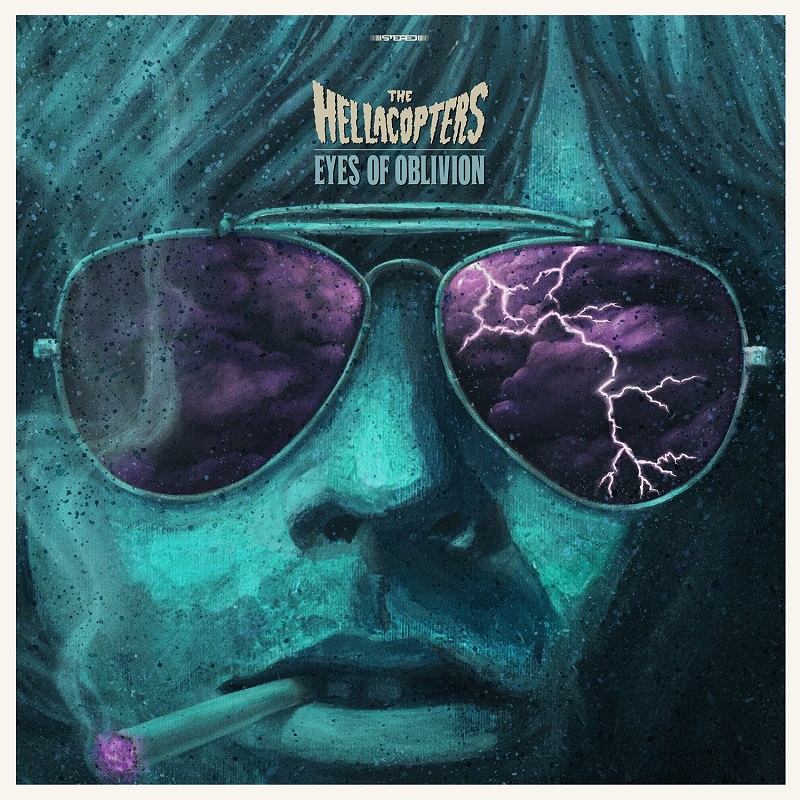 “Eyes Of Oblivion” is The Hellacopters eighth record. The first for 14 years since 2008’s “Head Off”. That’s fine, and all strictly true. Ask my postman about their back catalogue though and you’d get a wry smile and a rueful look into the middle distance.

You see, there was a time in the late 90s and early 2000’s that he was marching vinyl’s down my drive on an almost weekly basis.

The Hellacopters were the archetypal underground heroes. Record clubs and proto online communities existed solely around their music (I know because I was in them all). Thus, it’s tough to explain the importance of “Eyes Of Oblivion” to some of us. There will be people reading this through the same misty eyed nostalgia for nights on the Changes One Message Board, or the import record shop on the South Coast that I forget the name of that I paid an absolute fortune to for the white vinyl of “Grande Rock” in 1999.

In fact, I am tempted to say that if you weren’t around for the first time let us have our moment, catch us up later, yeah?

There’s a matter at hand, mind you, and its these ten songs. And I’ll be totally honest, this was a record that you put on your playlist with trepidation. This is The Hellacopters, man. This is not some shitty little band that’s reformed. They’d best not mess this up.

So you’d best believe that I’ve got a vested interest in this. I’d never lie about something so important. Like when Homer Simpson said: “this isn’t like a loan application or a mortgage.”

And I’m here to tell you that “Eyes Of Oblivion” isn’t very good. Rather its astonishingly brilliant.

It begins, as it should with a riff from Dregen, one that doesn’t so much say “we’re back” as “I’m back mofos!” and The Backyard Babies man is back in the saddle this time for the first time in a quarter of a century, for all kinds of sonic madness. The leads slash, course they do, but its not 1996 anymore, so nothing’s to the Max, not really. Rather it’s a study in the rock sound that this band and the aforementioned BB created. And one which no one else has perfected except them.

“Can It Wait” does more in less than two minutes than most do in careers. Even more incredible is that isn’t particularly punk, its just short and perfectly formed as the interplay between Dregen and Nicke Andersson underpins this.

“So Sorry I Could Die” was a shock when the single came out. Proper blues. Proper dark and the keys of Anders Lindstrom are mighty here. Plus the cleverness of the lyrics should never be underestimated where this band are concerned.

The title track is the sound of cobwebs being dusted off. Latter period (the first time round) albums were full of brilliance like this and Andersson reckons some of these were written a decade ago. I’d bet this is one.

Indeed, everywhere you look there’s nods to the old sound, it sounds fresh. “A Plow And A Doctor” begins with the words “it seems we all caught a cold” and might be about the pandemic. Then again it might not. What I am certain about is that the drums of Robert Erickson thunder on “Positively Not Knowing” (key line “I don’t know where I am going, but I’ll go eventually” – a maxim to live by if ever there was one.) and I am fairly sure that “Tin Foil Soldier” rails against the modern world. That it does so with stack heels and a glam stomp that would make Sweet blush is even better. It might be the best thing here (in truth I’ve listened to the album about 10 times and had a different favourite every damn occasion).

“Beguiled” has a little gallop, and “The Pressure’s On” is so catchy they probably need to come up with a vaccine for it (and that’s the mid paced ballady one they always chuck in), while the last one “Try Me Tonight” is a romp. Where they’ve just chucked everything in. A bit of Chuck Berry here, a bit of Thin Lizzy there, layers of harmony and a piano that comes straight out over “Great Balls Of Fire”. Great balls of something pulls this off, I guess. That’s why The Hellacopters had no peer.

They still don’t. “”Eyes Of Oblivion” is made by five men (including new bassist Dolf De Borst) with a chemistry and a total mastery of their craft. It’s incredible. And to borrow a line from The Wildhearts: “and now you’re back, its like you never really went away.” The Hellacopters didn’t, actually, I play them still as much as I mention them in reviews (which is just about every blinking week!) but now they are here for real, and pinch yourself, I swear this is as good as anything they’ve ever put out.

When it comes to The Hellacopters, more than most bands, if you know, you know. And I know this is a work of genius.