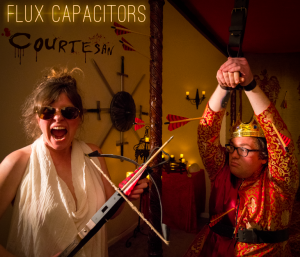 Although this was released a while ago I recently saw the band supporting Alternative TV in Bristol and was very impressed with their show and the band asked if I would do a review.

The band features Hazel Winter once of the Blue Aeroplanes and her talented sidekicks on guitar and drums. This is a great album which has everything from crazy bluesy rock, mellow folk influenced tracks and infectious poetry. This is genius and madness all in one place.

Flux Capacitors are a brilliant, unique and bizarre and no doubt appeal to old punk/post-punk fans, fans of the White Stripes, , The Vaselines, Lovely Eggs, Half Man Half Biscuit, Nirvana and those of us who appreciate originality, self-expression and doing what you believe in.

The band is jointly led by Hazel Winter and Michael McNeil who complement each other well and clearly share the same strange sense of humour as well as possessing great vocal talent and the ability to craft a tune and play those geetars.

Unlike the 3 piece I saw live with 2 guitars, voices and drums, the album has bass, string arrangements and is very well produced which you would expect from someone with Hazel Winter’s experience. There are many people on the album, Annie Gardiner on bass and Dave Burbidge on drums on most of the album, with contributions from Ellie Daymond,  Max Harrison (drums) Gerard Starkie (guitar) Anja Quinn (backing vocals)  Beth Porter (cello) and Andrew McGillan (harmonica).

Hazel Winters songs are very different from each other. ‘Swimming’, is upbeat with a great tune, lyrics and an excellent middle section. This tells the story of hanging from a balcony, naked with a crowd gathering below, to swimming, with your mouth full of polluted water. The delivery of one of the main chorus lines, ‘I’ve never swallowed so much piss without being paid for it!’ is pure genius.

All Hazel’s lyrics are brilliant and deal with a lot of shit life throws at you. She uses her lyrics to move the themes from depressing to shouty swearing humour and taking the piss, evident on My Hair Is Thinning at the Front’ and  the Bluesy Rock of ‘Satan (Love Song For Bill Hicks)’ – Not many would even contemplate the line ‘I’m Too Old To Suck Satan’s Cock’

‘Chaos’, Oblivion and ‘Deep Diving’ are slower tracks in which she bares her soul, these at times are very delicate and show she can carry a tune with little more than a guitar, a great vocal and a string arrangement. The shuddering during the high notes on her quieter, slower, songs , giving them an almost neurotic edge.

McNeil takes the lead on three songs (Melt, Paul and Buckfast at Trinity) which are the most ‘punk rock’  ones perhaps.  Melt is a surf-punk song which reminds me of the Pixies. Paul is a hilarious song about a nagging boss who is always on his case. ‘He thinks my name is Michael/ but that’s not my name at all’. The boss plays in a band and McNeill puts everyone on the guest list. Funny stuff with great music.

‘Buckfast At Trinity’ starts with a stomping bass drum and takes off like a heavier version of U2’s Vertigo. This is a story about his dad going to see Death Cult and off his head so that ‘These walls don’t reach the ceiling’. The bass is melodic and driving and the guitar soars over it with some great licks and leads. Having seen Southern Death Cult in the early 1980’s this brought back a few crazy memories.

Telephone Triage Assessment is a semi-spoken rap about an NHS assessment by phone of someone very distressed.  The anger at the procedure you are forced through is both sad and comic in equal measure. How a song about such a traumatic event’ can be so funny shows how well-crafted the songs are and their ability to draw you in.

The poetry is an interesting slant ‘ We Double-dipped the Blockhead’s Hummus‘, is about causing havoc with some salt and vinegar crisps. ‘Gig above a cloud’ is great and the classic  ‘Three Drumkits on One Stage’ will appeal to drummers of support bands. These departures are funny and work well between the songs.

This is a great combination of surf-punk, feminine post-punk blues and angst with feedback, wit, and poetry. The Flux Capacitors should really be headlining shows.