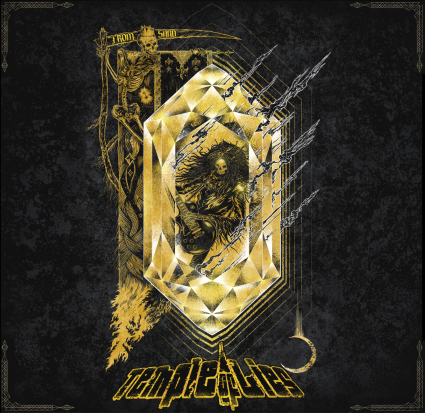 Dirty, grimy rock n roll from the swamps of the ……East Midlands

Sometimes it’s all in a name. Or to be accurate, it’s all in the titles. Just a selection of the ones on “From Sand” – technically the second album from Leicester’s Temple Of Sand, but featuring reworked and more “mature” versions of some from their debut three years ago – make it absolutely clear where we stand.

It’s a fact that if you call your song “Pigbitch” then good lord it not only should sound like this one does but it damn well needs to, and if you have a song entitled “Pure Alcohol” then you aren’t going for the children’s party circuit.

What you are doing, at least in the case of this bunch of reprobates anyway, is making an album where if the riff is king, then a barely concealed hint of menace is not too far behind.

On “Bats”, which comes on like Motörhead jamming with Peter Pan Speedrock just for kicks, singer Si is meeting someone by the riverside after dark. They’d best be afraid. On the enormous “Crystal” we move from crystal balls to crystal meth at the blink of an eye, and there’s a sense throughout that it could all get very messy very quickly if Temple Of Sand had a night out in the local.

The title track seemingly ushers primordial up from the swamp, while “Feed The Greed” is strident and confident and would don it’s knuckle dusters at a moments notice and surely the Clutch type thumping, crushing opening of “Riff Machine” is supposed to offend the neighbours? Come to think of it, calling a song “Riff Machine” is as self explanatory as it gets.

Things end with perhaps the most ambitious track on show. The slowed down – slightly more stoner if you will – balls out riffery of “MoM” and as its moniker suggests it’s one of the best things here.

Calling this biker rock doesn’t do the album justice. Rather if Orange Goblin and “Blood, Fire And Love” era The Almighty got together to jam on some Tad tunes this would be the sort of grease filled result.

Underground, and unashamedly grimy, “From Sand” is everything it aimed to be.