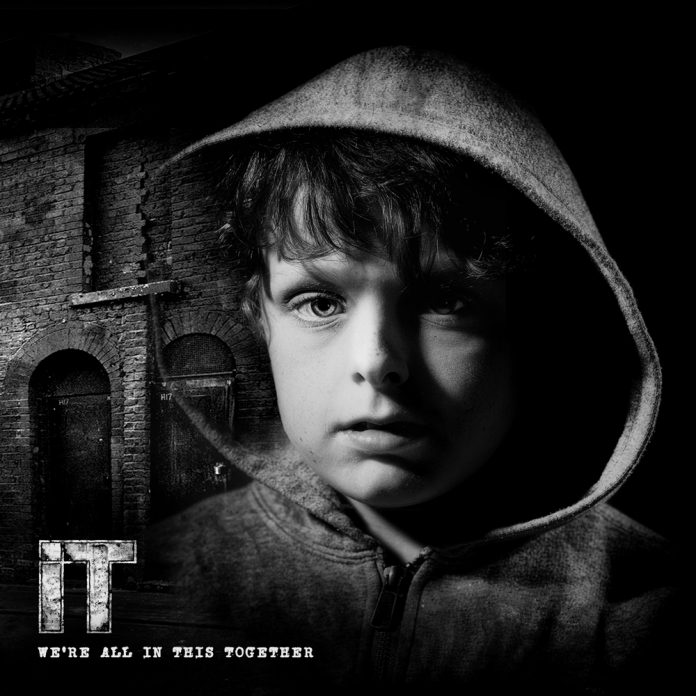 As the joke always used to run on the brilliant I.T Crowd comedy show, whenever anyone rang I.T support they’d be met with the same response from Roy and Moss: “have you turned it off and on again?”

Perhaps London prog collective I.T took that a little too literally, given that this is their first record since 2009. Whatever, “We’re All In This Together” – the title of a which is taken from an infamous speech by the then leader of the opposition, David Cameron, gave to the Tory party conference in that year – sees the band take to task just about everything that has occurred during that time.

To that end, it is fair to start, not at the beginning but towards the end, with the quite astonishing “Voices” which features an incredible spoken word passage from Respect Party leader George Galloway, in which he calls for Tony Blair to tried for War Crimes and vows to fight him “for as long as God gives me breath”.

The track also includes some dark imagery which sees “the caskets being taken down to Wooton Bassett” and is one of the best and most thought provoking pieces of work you are likely to hear.

The same could be said for the whole of “W.A.I.T.T”. Indeed, you can really see the bands origins as  multi media pioneers in the 1990s. The record starts with a clip of a some kind of banker explaining how you can make money from the recession, while “Power” proceeds to excoriate him and his ilk.

Musically it is an interesting prog brew, which ranges from the stark electronics of the opener, to the more lush soundscapes of “Born Into Debt” – think latter day Marillion circa “The Sounds That Can’t Be Made – while “The Working Man” almost melds the two together.

There is, despite the fact that this is a mighty and weighty prog work, an impressive brevity here. “The Working Man” boasts fine but understated guitar, together with some backing vocals that recall Mansun’s heyday of the late 90s – but still does it in less than five minutes.

When it does feel the need to stretch itself it does so for effect, not because it thinks it should. “The Path Of Least Resistance” – the longest track here by some way – is a slow builder of an epic, dealing with the riots of a few summers ago (“grab the flatscreen and the shoes/we’ll make you famous on the news”) it is superb and interesting song.

As it goes on – and the cinematic “Down The Hatch” is a real highlight – there is barely an aspect of British life that isn’t picked over, before it all concludes with the rabble rousing “Revolution” which positively crackles with electricity, as well as wrapping itself a genuinely heavy hook.

There is, of course, a time and a place for all different type of music and sometimes brainless rock n roll hits the spot. “We’re All In This Together” most definitely isn’t that. Instead its clever, challenging and very, very good indeed.

I.T are a band rebooted.