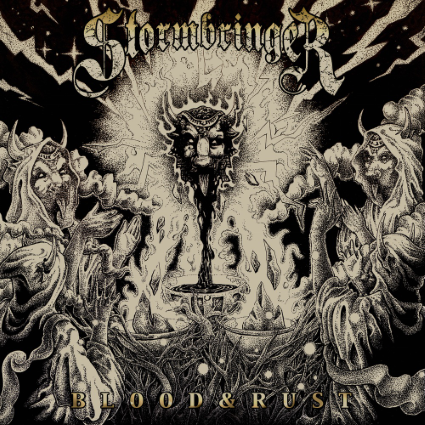 
A classic case of a good idea becoming something more, Stormbringer began around the turn of the decade – according to the band anyway – in the pub. Made of bands from the area like Viking Skull and Deadeye they made the debut record for fun and ended up on the main stage at Bloodstock.

Since that day – and they were excellent by the way – they’ve done a swap of singer. Mike Lockley had other commitments, his replacement Jimi Brown (ex-Burn City Burn) sounds like he’s not only committed but that he’d fight anyone that got in his way.

There’s a bit of calm before the storm – the title track is an instrumental filled with dark intentions – after which the switch is flicked and we are galloping and we don’t stop for anything. “No Redemption” sounds like the band that gave Stormbringer (we assume) it’s name. Either way it sounds like Deep Purple jamming with a NWOBHM metal band and it’s letting it’s hair totally down. Brown sings with a certain glee “I take pleasure when you’re in pain” and sounds like he might mean it too.

This anger carries on into “Rise” but it’s “Bad Blood” that really impresses. Just a magnificent modern rock song with classic influences, it’s hook and chorus deserves to take it – and the band – a long way.

Actually the skill of Stormbringer is that they are never a pastiche like some of these things can be. There’s a modernity here that’s lacking in other bands with retro thinking, “Ashamed” is timeless, but only because it’s a great song whatever era it’s from and “Off The Edge” does the massive riff thing pretty well before sticking (almost literally given the lyrics) a middle finger up at whatever gets in its way.

Groove is a given here, even allowing for that, “Cross To Bear” has more than most and if it’s epic you want “Voice Of Demons” which comes on a little bit like Alice In Chains does that too. Hell, there’s even a couple of slower tracks and “Unto Me” which thinks it’s in a stadium somewhere.

As if to prove that “Blood And Rust” is all things to all men, it tops things off with a cover. Talking Heads are the ones to get the Stormbringer makeover and “Psychokiller” is made muscular and sounds like it belongs here.

“Blood And Rust” is nothing more and nothing less than a mighty fine snapshot of what hard rock should be in 2015. Hook laden, angry and above all fun, it is a statement which says the storm ain’t just coming any more, it’s been, gone and left you to pick up the debris.