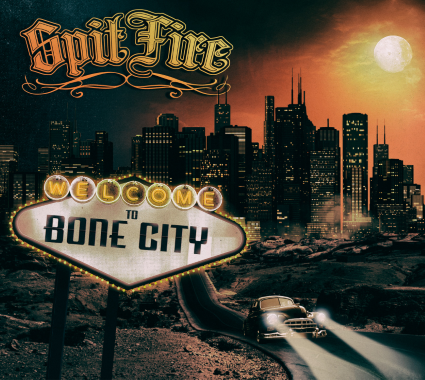 Is there something going on in Germany that we need to know about? It’s a question that needs asking, because every week it’s seems that there’s some young band who is intent on sneering at   – and kicking the asses of – the record buying public.

A little while ago it was Gloomball who emerged with their muscular second opus, now from the same SPV stable (the record is released on Rookies and Kings, an imprint of the German label) come SpitFire, who seemingly want to make an album so testosterone filled that you might choose to get it drugs tested before the end.

The 15 tracks on “Welcome To Bone City” posses a great dollops of groove, of cocksure confidence and just enough anger to make you think that the album might want to fight you down a dark alley while wearing denim, leather and carrying a flick knife.

The three behind this glorious piece of abandon,  Dick Dropkick – Lead Vocals / Guitar, Johnny Jailbreak – Bass / Backing Vocals and Nikk Nitro – Drums / Backing Vocals (possibly not their real names) have constructed what is a kind of concept album, taking you on a journey through Bone City, a place that has had better days, it seems, but the seedy side of its life allows some superb anthems like “Fall From Grace” and “Motorman.”

At its best “….Bone City” is aggressive, short, sharp and carries on like it would punch it’s grandma in the face just for kicks, but let it be said, SpitFire know how to write a hook and no mistake. “Bone City Radio” carries with it the most exhilarating “whoa, whoa” bridge that has been written in a long time.

Oddly they are just as good on the rare times they slow things down. “Battlefield,” which has a huge chorus designed for stadiums, strolls through its verses like something on The Almighty might have attempted in their quieter moments, but then comes something like “Hell Or High Water” which races off down the fast line on some serious business. Then there’s a cover. And we shit you not, their take on Kenny Loggins’ “Dangerzone” isn’t bad at all.

There is a wonderful lack of self-consciousness here, that sets these dirty little anthems apart. Like one of the songs here says, there is a real sense that SpitFire are as they put it, the “Last Gang In Town” and what they’ve done on “Welcome To Bone City” is construct something rather superb.