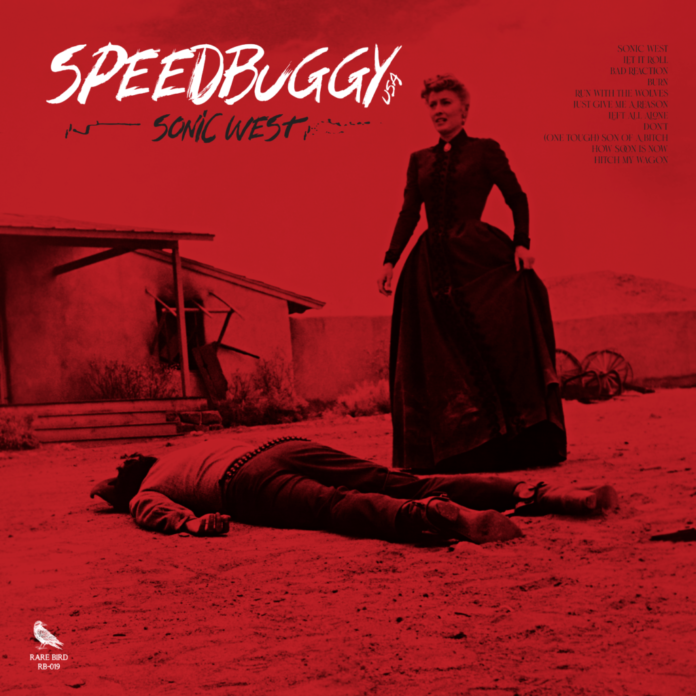 The best thing about reviewing bands like Speedbuggy USA is that whatever you hear in the album, whatever influences you can pick out are never wrong. Whatever you hear is meant to be there. And why? Well, because Timbo and the boys are just fans of the music. This music. Like you, like me.

With one key difference: they have the talent to do what we can’t – make stunning records.

“Sonic West” in that respect, is just another to put alongside “Kick Out The Twang” – that I reviewed in 2018 – but it’s not just another anything. It’s wonderful.

The title track is like one of those Surf bands, something like The Ventures, something like a song that would end on a Taratino movie. There’s a monologue, it probably doesn’t mean anything, but it sounds cool. It is cool. That’s because Speedbuggy USA are cool.

Those three letters, “USA”, are doing a lot of heavy lifting here. This is for the kids who grew up in the West Midlands, playing Georgia Satellites and Jason And The Scorchers records (that’s me, in case you are wondering) but it wouldn’t work anywhere near as well if it wasn’t an American band. “Let It Roll” is a case in point. Chugging along like Johnny Cash riding the rails one minute, having a full on Jon Spencer freak out the next.

Returning guitarist Steve Kidwiler is to the fore on “Bad Reaction” – his lead is so good it even makes good on his claims to have channelled Randy Rhodes – but it’s dowsed in harmonica too, and good on it. It just sounds filthy.

As much as this is a rock n roll band in its purest (dirtiest?) sense, there’s a country element to this that is inescapable. It makes for thrilling music, especially when they are doing stuff like “Burn”, “life don’t mean a goddamn thing, when you got time to burn” sings Timbo (like Cher, he’s not arsed with surnames, probably makes him harder to trace for the police?) and the chorus will be in your head all day (trust me on this….)

It’s not a one off either. “Run With The Wolves” even sounds like The Hold Steady would if they played cow punk, and proof that it comes naturally is all over “Just Gimme A Reason”. That thing about influences? Well lets be honest here, they’ve ripped off The Stones, and that’s cool. They know it. But because Speedbuggy USA are so good, they make it their own anyway.

On the press pack for the album Timbo talks about hanging out with John Fogerty. CCR are Gods, that’s a fact (we aren’t debating this). I was the last person  on the planet to get Netflix. The first thing I watched when we did? The Credence film. Anyway, the point to this? They’d approve of “Left All Alone” down at Cosmo’s Factory.

There’s a bit of soul on “Don’t”, which is fun, but “One Tough Son Of A Bitch” is more the ballpark you expect. Ready for a rumble down the honky tonk, it’s the essence of the band and in case you thought they had nothing tender about them whatsoever, well “Hitch My Wagon” is all the proof you need that they have hearts. A beautiful conclusion to the record and the organ outro is a brilliant crescendo.

How good is “Sonic West”? Well let me answer that question like this: The only song on the album I’ve not mentioned is “How Soon Is Now?” And yes, it’s The Smiths. And like most people with taste I can’t stand Morrisey. This though? This is superb. So how good is it? It made me like a song by The Smiths. That good.

Speedbuggy USA deserve to be on the cover of the Rolling Stone. They are after all, just an American Band.