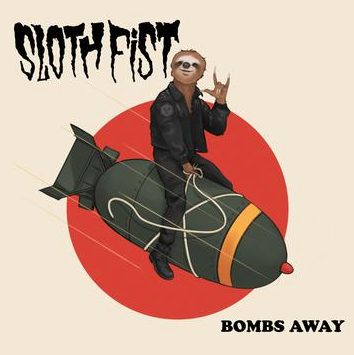 I actually wasn’t going to start this review like this – but sometimes you have no choice.

So let’s have – before we get going – a moment of applause for the fact that Cody Shavers, one of Sloth Fist’s guitarists, used to be in a band called blanche Davidians. I haven’t heard the band, however, based on the fact that it is the best name in the history of recorded music I shall be, as soon as I type this.

Right on we go and, first off, “Bombs Away” is a “pandemic” album. The seven songs on it are angrier and darker than those that Sloth Fist have put out before, and God knows, if you aren’t upset in 2022 than you are dead.

Saying that, you can’t accuse them of not being eclectic. “Bombs” leads off with 101 seconds of fury. Somewhere between Motorhead and the New Bomb Turks, if they were fighting Zeke, you think you know what this is going to do. Basically, not the sort of thing you imagine for one second that is coming out of Dallas. There’s no George Strait here. More like Straitjackets.

But no, this isn’t a one trick pony. The next one clocks in at over four minutes, and makes good on the suggestion that is always in the other reviews of the band: namely that they sound a bit like Turbonegro. The low-slung guitar of my new mate Shavers (he’s electric…..[sorry]) but “Too Old To Rock” is even better for the fact that it sticks a middle finger up in the air at the thought that anyone is too old to do anything (as an aside, I was at a Uriah Heep show the other day and at 47 was one of the youngest there. It was a brilliant turnaround from normal).

There’s a clever word on the press notes that came with this. It calls Eric Daniels “vocalist”. You couldn’t call him a singer, but my goodness, like Lemmy, yer man was born to do this. “Cut Through It” is amongst the nastiest, yet most mellifluous punk n roll, this side of Crank County Daredevils (who no one else will remember but me, no doubt!) but Daniels sounds like he’s gargling razor blades with a sandpaper chaser. That’s especially true on “We’re Fucked”. Like a turbocharged Ramones, if they were staffed by Hells Angels, it sounds pretty much like you’d imagine it was going to, but you can’t resist it.

“Face/Off” has been sniffing glue with Dead Boys and is proud of itself. “Total Party Kill”, is the anthem for blokes who party on their own terms. I imagine any do at Sloth Fist’s gaff might scare the crap out of me, mind you. I’ll just look at the pictures.

The last one, “Problematic” even sounds a bit like The Bronx. There’s an element to them that they sound like the baddest gang in the world. The type to bring a knife to a gunfight, but on the other, there’s the reflection of the last one: “I dunno what we’re fighting about” offers Daniels, but whatever, there’s enough righteous indignation to go around.

“Bombs Away” fair old explodes and Sloth Fist have connected with a real haymaker of a thing. Now, excuse me I’ve got a band to listen to……