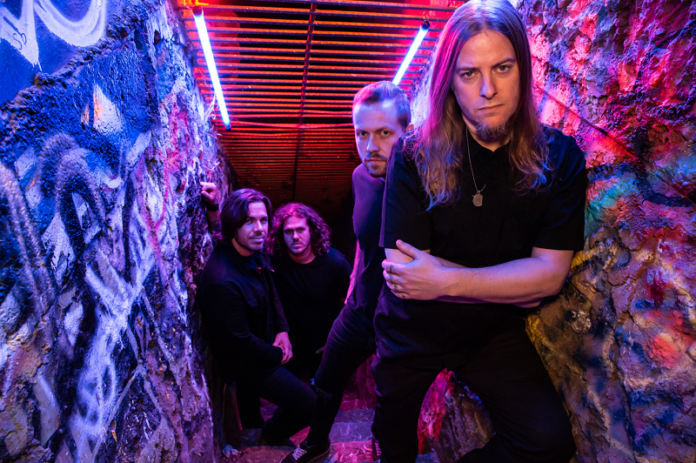 Deron Miller, founding songwriter, vocalist and guitarist, explains the meaning behind the song:

“‘Fire Skyline’ is simply about 3 teenagers, 2 boys and a girl, that conspire together to set Hollywood on fire at midnight. After successfully setting up their implements of arson, they head to to the roof of a 50 floor hotel. Sitting on the edge with their legs over the side, they pass around a bottle of vodka and watch the panic and chaos ensue. The sight of the horizon becoming a dark orange is the most incredible thing they’ve ever seen.”

Years in the making, 96 BITTER BEINGS‘ Synergy Restored is 11 songs of relentless power and vibe. Four-on-the-floor, fuzzy and visceral, proper rock n’ roll made by an actual band, rather than a bunch of over-processed samples and otherwise stale shenanigans. Songs like ‘Vaudeville’s Revenge‘, ‘90 Car Pile-Up‘, and ‘Wish Me Dead‘ offer vivid reminders of the truth-telling prowess of guitars, bass, and drums. Miller is on fire, weaponizing the same knack for memorable musical epiphanies behind projects like Foreign Objects, World Under Blood and CKY.

Deron Miller gives his life to the riff. Unrestrained by industry expectations and genre limitations, the boundlessly prolific guitarist and voice behind multiple beloved projects is best known as the founder, front man, and songwriter in CKY. His authentic and effortlessly hooky heavy rock obsession returns with 96 BITTER BEINGS. Reinvigorated and ready to rumble all over again, Miller roars back with the same reverence for riffage that made underground hits out of CKY anthems like ‘Flesh Into Gear‘, ‘Escape from Hellview‘ and ‘Disengage the Simulator‘ from 1998 till 2011.