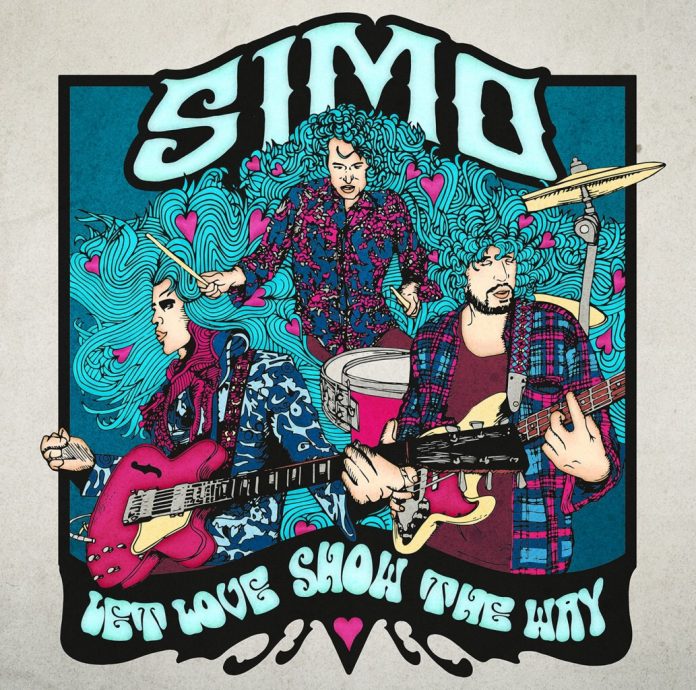 Chicago native J.D Simo has been playing guitar since he was five years old. It’s safe to say that the virtuoso player is better on the six string than you (and if you are reading this and you are better, then get in touch because we want you on the site…..) but you could be forgiven for not realising that fact at the outset of “Let Love Show The Way”. Until, that is, you get to the bonus tracks.

The second album from the band that bears his name (although the artist himself has a string of records) has been going along in extremely pleasant and interesting fashion, flitting around different styles, but fitting very neatly into the current vogue for classic rock tinged with blues. This is, so we are told, a jam band, and right almost at the end of “…..Way” they prove it in spectacular fashion on the trio extra cuts. To call “Ain’t Doing Nothing” (played on Duane Allman’s old guitar no less) astonishing, is to rather undersell the work. For 14 minutes Simo makes his guitar talk, gently weep and generally sound like the finest instrument on the planet. The other members of the trio do things in a rather understated fashion throughout the track as if, they too, know they are in the presence of something approaching genius.

Then, as if to cleanse the palate, things end with a gorgeous little acoustic strum, “Please Be With Me” which sees the album decamp to the campfire as the sun sets.

The level of class on offer here is well known. When Joe Bonamassa recently played his show at the tiny venue in which he’d played his first UK show ten years before, he chose Simo as the support act. So now would be ideal time, surely, to capitalise on the success? It seems they intend to.

“Let Love Show The Way” is a wonderful mix of covers and new songs. It starts off with Elmore James’ “Stranger Blues” but the self-penned stuff isn’t out of place. “Two Timing Woman” and “Can’t Say Her Name” are pretty self-explanatory, but no less fun, while “Please” stomps around, and is all the better for it.

Happy, and gloriously so, to take whatever diversions it feels it needs, “Long May You Sail” is a warm and fuzzy piece of psychedelica, and “Becky”s Last Occupation” takes what Rival Sons do and does it better.

Ostensibly only ten songs – give or take the three magnificent postscripts – it closes with a warm and lilting instrumental, but in reality Simo are only just getting started.

The title track – itself a bonus after the end of the record – is a beautifully played song with beautiful sentiment, and is huge in scope – imagine Black Crowes “Seeing Things” turned up to 11 – Simo it appears, are not a band that wants to do anything by small measures.

The blues rock market is crowded right now as people look to the past for their future inspiration, but there’s a way to get your music heard above the rest. Be so good you can’t be ignored. And if talent counts for anything, then in ten years time, it’s Simo that are set for arenas.