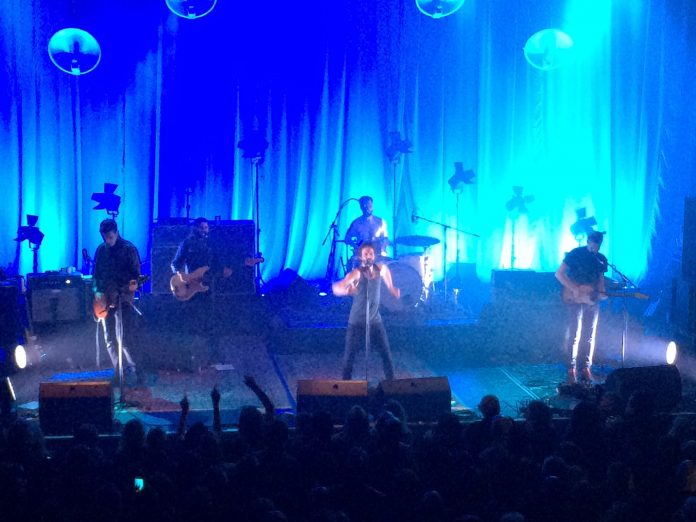 If you were to handpick the support band for The Temperance Movement, then allow us to suggest that band might be laid back, look like they still think it’s 1973 and have great songs. That being the case, The Sheepdogs are perfect fit. In fact, The Sheepdogs are a lot more than that. They are the best support band that MV has seen in a very, very long time. Afforded a lengthier set than the first act usually gets, they set about winning a crowd over with aplomb. You can’t imagine they have often had problems with this, because from the very second that Ewan Currie opens his mouth it’s clear they are very special indeed. One minute they are rocking out – “I Really Wanna Be Your Man” – the next they are almost a full on soul band – “Bad Lieutenant” – and then just for grins they turn into The Allman Brothers on “Southern Dreaming”. One of those bands that possess the ability to write timeless music; you could swear that you already know the song from the opening riff, but it’s an original not a cover. Somewhere between Skynyrd, Canned Heat, Credence Clearwater Revival and Curtis Mayfield, they are simply stunning. Their best moments, arguably highlight the differences on view. Keys man Shamus take centre stage and adds a trumpet lick to “Help Us All” while “Take A Trip” gathers all their ideas and ties them together. Proof positive that Canada has a higher proportion of awesome bands than it should, The Sheepdogs need to be …..herd (sorry!)

Strolling onto the stage half an hour later, The Temperance Movement do so with the quiet confidence of a band that has an album in the top 20. Rock ain’t supposed to sell. It does when it’s so good it can’t be ignored, and but for the tragic death of David Bowie, you can bet that their new one – the brilliant “White Bear” – would be even higher in the charts.

The band know it’s good too, you’d guess, given that they start with two of them “Three Bulleits” and the pulsing “Oh Lorraine”. Both showcase TTM in 2016. Classic rock still, but slightly more modern – and all this talk of some type of departure is basically nonsense, any differences are more a natural progression.

The band, though, is changed founder member Luke Postashnick decided life on the road was no life at all and new man Matt White fits in perfectly, and meshes wonderfully well with long standing six stringer Paul Sayer.

For this, their first UK tour in a 14 months, the band has constructed a set that is basically half and half new and old. The new stuff, with the heavier “Modern Massacre” packing a punch, is already well loved despite the record being out 10 days. Indeed they have enough faith in it to end the set with one of the fresh cuts, in one of its highlights in “Battle Lines”. The old stuff is greeted like old friends. With good reason too, “Midnight Black”, “Ain’t No Telling” and “Pride” are brilliant songs by any measure, and “Only Friend” is a communal sing-song of the golden age.

Taking centre stage here – both literally and metaphorically – is singer Phil Campbell, still the preening, prancing rock n roll frontman, he has a formidable singing voice too, and on slower work like the massive “Smouldering” he gets to prove it.

Those ballads are a massive part of what TTM do, but they are clearly a band with plenty of ideas too. Already giving the album’s title track a makeover – it remains a superb song however they play it. As if to emphasise the point of the less full throttle efforts, the encore has a trip of them, each with subtle differences. “I Hope I’m Not Losing My Mind” is more psychedelic, while the closing “Lovers And Fighters” is huge. Apt really given that within the next three years, when they play this city, it’ll be in an arena.

The Temperance Movement are that band. The one you saw in the back of a pub before their album came out (literally true in MVMs case here), thought would be massive one day and who are actually going to be. For them, the only way is Wembley.