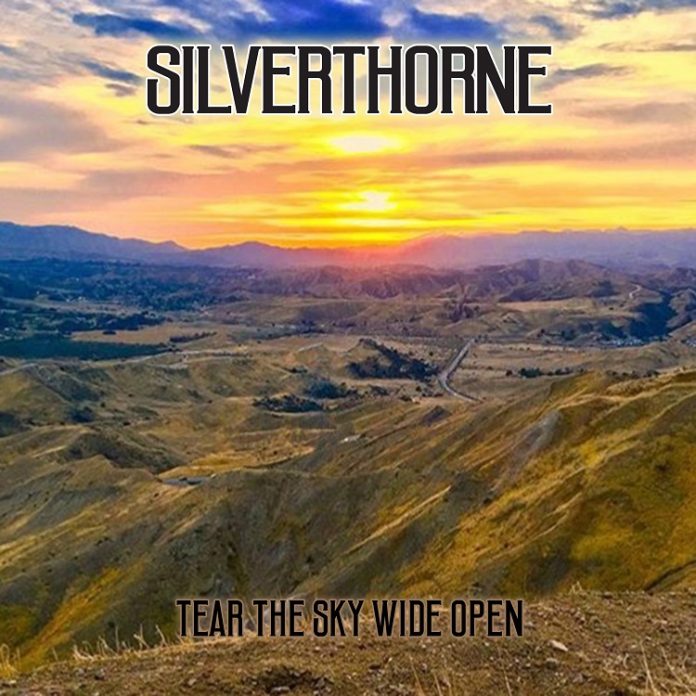 Debut EP’s, most of the time, are raw affairs. Some young band, full of ambition chucking its heart and soul on whatever tracks they’ve been playing live to their mates.

“Tear The Sky Wide Open”, well, put it this way, it doesn’t sneak in, hoping you don’t see it. It makes a massive great entrance.

Goodness me, this five tracks was a house guest, it wouldn’t politely stand in the corner waiting to be asked. It’s made itself at home.

The in-built confidence that oozes from every pore is precisely because Silverthorne’s members have got a pedigree. Brian Tichy? Drummed for everyone from Billy Idol to Nickelback. Pete Shoulder? He was in the should have been huge Winterville when he was a kid, was in The Union with Luke Morley when Thunder had a hiatus, and bass player Daniel Spree is one of The Drills with sometime Jovi man, Phil X.

All of which means when they are asked about their influences, Silverthorne say this: “With our studio located in the sprawling canyons on the outskirts of Los Angeles, the canyons and surroundings have an effect on the music we make. That atmosphere gives us space and solitude to focus on creating music with openness and freedom. No rules, no distractions, no limits!”

Yep, just like the kids down the Dog and Duck.

Thing is, as Mr. Bob Ritchie (Kid Rock to you people) once pointed out: “it ain’t bragging, if you back it up.”

Consider this absolutely glorious five tracker backing it up like a Tonka Truck.

The title track. Yeah, that’s just got an effortless groove that belongs in arenas. Those of us that loved Black Country Communion might recognise the same intent here. Massive, swaggering cool. Simple as that.

“Roll Me Back Again” has a little dabble into hard rock, kinda bluesy, but wholly superb, but they’re just getting started.

And I say that because “Black River Rising”, the third of these five and very much the centrepiece, is dark, meandering brilliance. Shoulder channels some kind of Chris Cornell vibe here, and it wouldn’t be too far of a stretch to suggest that it’s the best thing Audioslave didn’t have. When it kicks in, it fair explodes.

“Movin’” has a timeless fuzz that seemingly only your power trio possess, and if you are thinking of work like Cream on “Haunted By The Dawn” then I am going to go all out and say no one here will mind too much, although it is also fair to say there is an inherent modernity about this too.

There is not a lot better than a trio that gets it right. Make no mistake about it, Silverthorne are better than “getting it right”. Like all new bands with an EP and a dream, It’ll be interesting to see how they stretch it out over a full collection, but this is enough for you to get very, very excited.