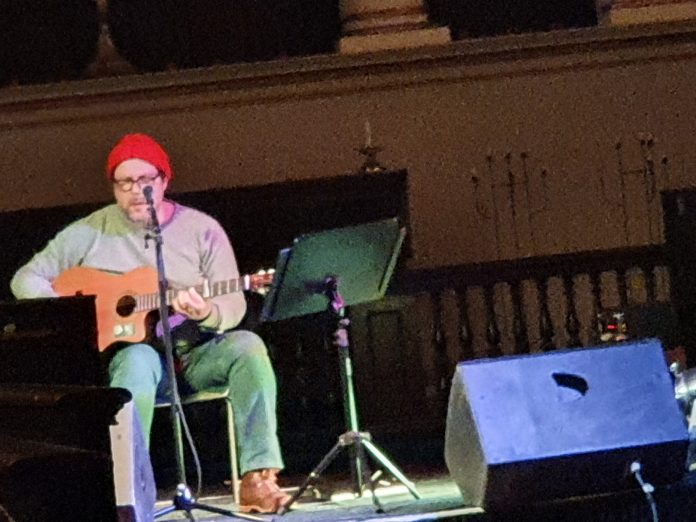 It’s somehow perfect that as we leave to go into the February night after Damien Jurado has played his show, that it is raining in the second city. Bleak suits what’s just happened.

Jurado, who looks like a kind of misfit, is evidently a lyrical master. The way he has used the language in his songs tonight to convey his thoughts, is incredible, and the gig has been superb, but goodness me, its not upbeat.

Bless him, he tries to interject some levity in it with stories of his cat, Frankie (even dedicating the last song “AM” to the feline) but as he said himself about halfway in: “that might be the only upbeat song you hear tonight, but I tend to find that my audiences like sad….”

The venue for tonight’s show lends itself to such an austere, quiet 90 minutes though. The pews of St Pauls Church, have no doubt been home to such lamentation before, but it is odd that you could almost literally hear a pin drop on occasion.

It is a fragile thing, and songs of such great beauty deserve handling with such care.

Last year, Jurado – making his first appearance in Birmingham in a decade – released a wonderful record, and “Lincoln” and “Newspaper Gown” from it here show the class it offers. The latter contains one of the great couplets on hiding your feelings for someone: “What if I told you/What your friends think is true? At the end of my day/ All I want is you/ Would it destroy you? Would you not want me around?” he sings. And if its heavy stuff for a Saturday night, then that’s just fine.

His voice too, carries these songs supremely well.  There is a kind of falsetto about stuff like “Allocate” that is all his own, and the way it melds with the guitar playing is – and there is no better word for it – gorgeous.

Many of the songs, and I guess such is the way for the singer/songwriter, seem concerned with transience. “The Last Great Washington State” (he’s from Seattle, releasing his early albums on the famed Sub Pop label) “Ohio” and “Kansas City”, but it almost doesn’t matter what it is he sings, because there’s something heart-wrenching and strangely poetic here in them too. “I was courted by Death today /In an attempt to take my life/He showed up with a nice bouquet/Of flowers for my grave” is sung matter of factly in “Oh Death Art With Me”, and on the genuinely haunting “Medication” he offers this on mortality: “Death is upon me, I know ’cause he showed me/ Pictures of graveyards and us underneath.”

There is a kind of genius here.

And it’s clearly one that is always on, too. During the set he plays two new songs – one written just a week or so ago – and the other “Day By Day”, a relatively ancient three weeks old, but they are both there, in his lyric book that he flicks through here, seemingly picking songs out at random.

Such is the way with the true artist, I suppose, but no two shows would be the same with Jurado. A man of faith himself, his work is suited to the church-type venues that he’s been playing on this tour (“it seems odd to drink in church”, he jokes as glasses clink upstairs) and his delivery is such that he keeps everyone in quiet reverence here. A strange vibe for a concert, and it felt more like a recital in keeping with the Sunday hymn’s tomorrow, but a brilliantly compelling and always interesting one nonetheless.