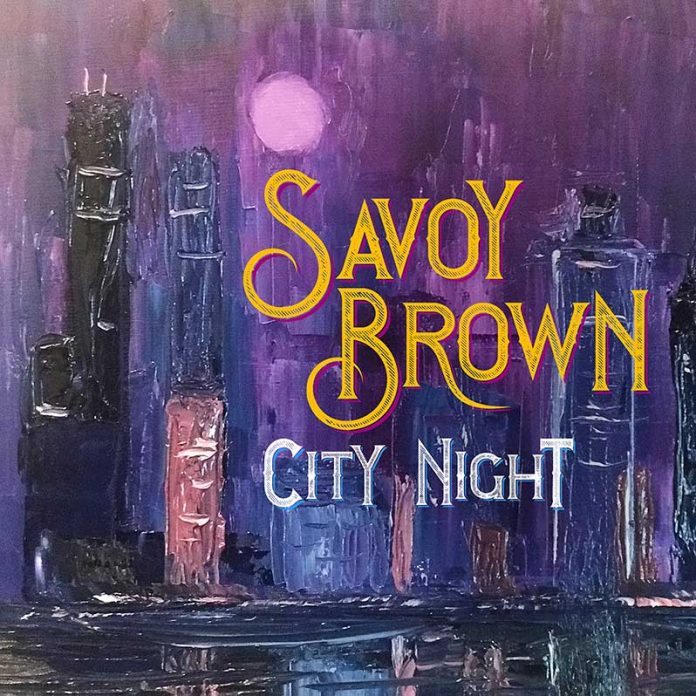 I saw Savoy Brown a couple of months ago for the first time. The gig was superb. A strangely relaxed thing, Savoy Brown main man Kim Simmonds through himself into playing his own songs, of course, but it was the love of the Blues in general that shone through.

“City Night” is the follow up to “Witchy Feeling”, that one was a surprise number one record in his adopted homeland of the US (Welshman Simmonds has lived across the pond for almost 40 years via a spell in London) and that continued success, commercially seems to have largely been missed out of the headlines.

This collection is their 40th record in a 50 year – almost – career, but it is telling maybe that this current line up is their most consistent and settled.

Maybe that’s why their career – and that of Simmons more generally – has been, if not airbrushed, then overlooked in the blues annals. He spoke at length that April night of the club he’d run in the 1960s in London and which all the greats had graced. His passion shone through still, and that same feeling is all across this hour.

It is absolutely indicative of the record that it begins with a chug and a scorching lead break. “Walking On Hot Stones” sounds desperate, in its lyrics, which is juxtaposed brilliantly by the calmness of the music.

It is striking how good Simmons is on the guitar, but also how the band Pat DeSalvo on bass and Garnet Grimm on drums is able to compliment it so well, this feels like a real tight group.

“Don’t Hang Me Out To Dry” has a hint of Billy Gibbons playing (ZZ Top opened for Savoy Brown back in the day and who knows, Billy might have learnt it right then?) and even if it is the classic “woman done me wrong” thing, it is still done with a real class.

“Payback Time” – which along with “…..Stones” was one that was aired six weeks or so back, has the confidence that only a lifetime of experience can give you. “Red Light Woman” on the other hand, has gloriously filthy slide to match its gloriously filthy intent. Lets just say that whatever he’s thinking of here hasn’t got six strings for once, shall we?

For all that on the surface this is a classic sounding blues record, there is a feeling that some kind of unspoken danger lurks beneath. Never, really is this better shown than on “Conjure Rhythm”, which summons all kinds of voodoo up.

You can name many players that this recalls, from Mark Knopfler to Eric Clapton, but “Neighbourhood Blues” has a touch of the recent Robin Trower albums about it – and the solo here is phenomenal.

Deep, mournful darkness is the order of the day on “Selfish World”, and the lyrics ring a little truer than they should in 2019, but as if eager to balance the thing out, there is a gleeful feeling to “Wearing Thin”, in which the half spoken lyrics almost take on a confessional air.

The title track is interesting too. I think we can all understand what sort of night he has planned with talk of “stranger girls” but again, we’ll leave that there. “Hang In Tough”, which might be more about his career than he’s like to admit is a real injection of fun and groove.

Whatever “Superstitious Woman” is an injection of it isn’t groove, there is a real mystical taste about this one, but it is interesting that an album that has been fairly restrained throughout most of its work, really lets its hair down before the end of “Ain’t Gonna Worry” – and maybe it is overstating the psychological here, but it feels like this is Savoy Brown’s way of saying there’s nothing to be concerned about as long as the blues exists.

“City Night” is classy, and wonderfully understated affair. And that is a metaphor too, for the career of Savoy Brown.