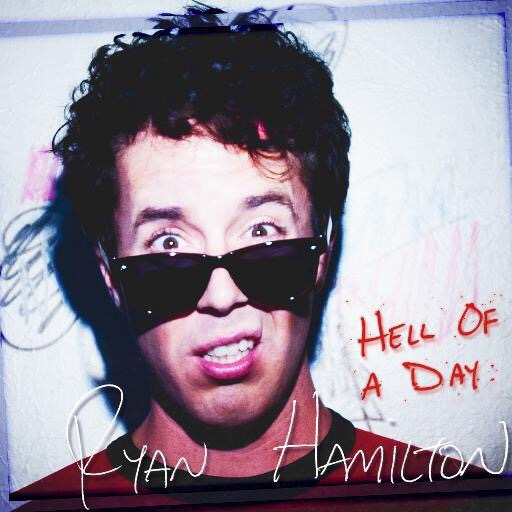 Earlier this year the duo People On Vacation emerged with one of those records that was – and still is – better than you thought it was going to be. Now, one of the main protagonists of that record, Ryan Hamilton, is back with a solo album.

PoV worked so well because it was unexpected. His counterpart in the band, Jaret from Bowling For Soup, weighed in with the dark songs, while Hamilton – who had hitherto been best known as being part of the band Smile Smile – added the sunshine.

Now, there’s the thought that on his own, and without the chance to add darkness to the happiness (and let’s face it, the best happy songs weren’t actually happy at all) it might a bit, well, too happy.

It is. Just once, and “I Love You A Lot” – which appears to be a song dedicated to Hamilton’s mother – could cloy….if it wasn’t actually really good.

The rest of the time “Hell Of A Day” explores exactly what Hamilton wants it to, and does so in such a way that no one needs Fountains Of Wayne anymore. Sticking a middle finger up to what is perceived as “cool,” the songs here are just that, songs. Well crafted and largely gentle, shimmering affairs, with choruses, beginnings and ends. And very few have Hamilton’s ear for a melody.

Beginning with the Beatles-ish anthem of “Be Kind Rewind” and then getting bouncier than a two year old on a trampoline with “Karaoke With No Crowd” is all very well, but then it adds a killer “Four Letter Verb” to proceedings, which is kinda like The Beach Boys gone rock n roll.

“Medicine” is – literally – a three minute pop song, but just when you think you’ve got it – and Hamilton – pegged, there’s a countrified “Take It On The Run” which, if it was written by The Eagles, would have made everyone involved millions.

One of those records – to use a dreaded phrase – that has something for (nearly) everyone, there’s a couple of really interesting moments before the end. “Records And Needles” borrows the opening riff from Georgia Satellites “Battleship Chains” is part bar-room boogie and part hymn to Hamilton’s heroes, but best of all, is “Respond To My Email.” Pathetic blokes (and women for all we know) the world over will surely have a wry smile to the chorus of: “Respond to my email, you bitch/ I wrote it ten times before it was sent/ I know you can check it/ you’ve got an iPhone and a MacBook Pro – although, with due apologies for dragging readers into a private hell, there will be probably just this reviewer wondering why he purchased Bryan Adams tickets last year though….

This day ends with another acoustic track, “Love Is Such A Chore” – a duet which brings to a mind Ben And Jason, and this is tremendous fun throughout. If all pop records were like this we’d buy pop records. Ryan Hamilton has a gift for writing this type of thing, and long may it continue.