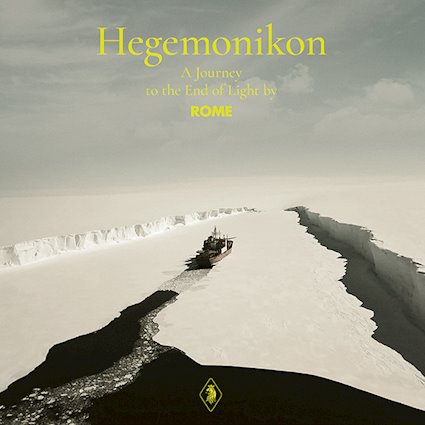 I like to think i`m pretty clued up on music but it`s always refreshing to discover an artist or band that you`ve never heard of before. Rome is one such band. They are a Luxembourgish neofolk band founded in November 2005 as a main output for the songs of Jérôme Reuter. Though Reuter is the main creative force in the band, he performs live with a range of musicians who also contribute performances on various studio recordings. The few things i`ve read on line, not always a good place to fact find reveal somebody who is committed to the idea of Europe both geographically, as a naturally cohesive entity, and philosophically, as a place of shared roots and values. So far, Rome have released one album every year since their inception.

The band have a new album ‘Hegemonikon – A Journey To The End Of Light’ which is their seventeenth and although Rome`s trademark is electronica and new wave with guitar-based dark folk, they have added a subtle touch of post-punk synth-rock to the mix.

Jérôme Reuter has visited Ukraine and played a show there and I felt the album may reflect the current situation in the country but with this album I think you can interpret numerous connotations.

We are introduced to the album via `A Slaughter of Crows` which is predominantly instrumental and very cinematic. There are strings before a drumbeat and spoken word declarations shared in an almost propagandist style. An interesting introduction which may reflect the similarities in the Ukrainian conflict now with the rise of the Nazi party in Germany in the early twenties. It put me in mind of the film `The Tin Drum` for some reason. We have a delightfully melodic number with flowing synth, guitar, and drum in `No Second Troy` which may well refer to a journey to Kyiv. In ancient Greek literature Troy was a powerful kingdom so this again may be an allegory as Troy was also destroyed by war. The addition of a female vocal later in the piece gave it a fairly poignant slant. I thought that there was a slight nod to Jean Michel Jarre in the musical accompaniment.

`Icarus Rex` has an edgy reflective feel with synth and a spoken word vocal which had a Nick Cave texture. I am unsure as to the title as in Greek mythology, Icarus flew too close to the sun, causing the beeswax in his wings to melt and he fell from the sky, plunged into the sea, and drowned, Rex is Latin for king and in my head it may refer to a king who failed as he didn`t heed advice offered, Mr Vladimir Vladimirovich Putin possibly?? A strummed guitar with an underlying synth platform allow the singer a base for `Surely Ash` a gently melodic contemplative offering with deep bass vocal tones.

`On The Slopes Of Mountain Malamatiyah` is an short aural soundscape with some words shared quietly and almost imperceptibly towards the end before segueing into `Walking The Atlal` a mesmerising piece with a spiritual repetitive constant heart that may refer to a site or city left in ruins.

The number seemed to grow in power and strength as it progressed.

`Hearts Mend` is a captivating earworm of a track with heartfelt interrogative lyrics that maybe question as to whether all can be forgiven in the end?? It may well allude to the aftermath of the current East European conflict and the pain inflicted. A wonderfully emotionally moving composition. We have a further brief soundscape or interlude with `The Ripping Of The Veil`.

`Solar Caesar` is another title that throws up possibilities as Solar relates to the sun a star at the centre of the universe and Caesar which is usually identified as emperor so a Sun Emperor or burning powerful emperor at the centre of all things, who could that possibly be! The track is captivatingly contemplative and delightfully mediative sound wise. There`s a kind of spoken word oration on Stone of Light / Mer de Glace`. Stone of light or Aegirine is known as a stone that allows us to ‘see the light’ – for some this can mean finding our way out of a low emotional state, for others it’s a surge of energy or sudden clarity while the Mer de Glace is a valley glacier located on the northern slopes of the Mont Blanc massif, in the French Alps. As both seem to convey a kind of clarity, it may well be a metaphor of how the conflict will transpire or end or not.

The album closes with `New Flags` which is a ruminative submission that examines the outcome of the current hostility and what may well occur on its conclusion. A flag being a symbol under which a country can show pride, honour, or patriotism .

‘Hegemonikon’ might refer to Hegemonikonis ‘internal rational ruler’. This name is in use among many philosophers of Ancient Greece to address the intellectual governing part of the soul.

Whether i`ve misinterpreted this release or read something into it that`s not there, i still found it an extraordinary listen that not only sated my musical soul but made me sit back and reflect on something that was outside of my usual thought process.

Rome with their latest opus ‘Hegemonikon – A Journey To The End Of Light’ allowed me just under forty minutes of thoughtful auditory contentment. I suggest that you invest in a copy and enjoy the same pleasurable experience.