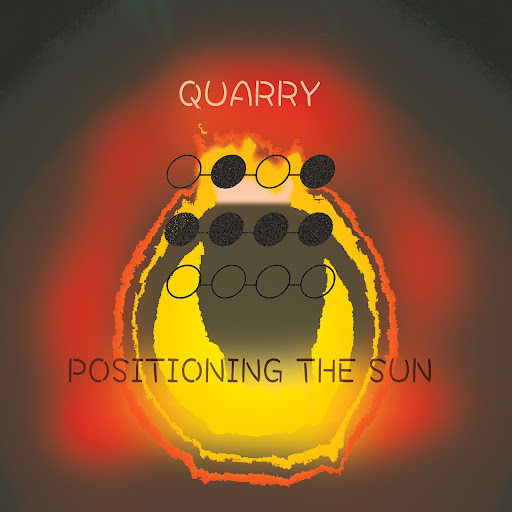 Milan-based, London-bred artist Quarry delivers the follow-up to his 2019 album `Super Arcade` this month with ‘Positioning The Sun’ written and recorded in Milan during the worldwide pandemic.  Quarry is the alias of Italian-born singer-songwriter and multi-instrumentalist Vittorio Tolomeo, a self -taught musician who began playing the drums and guitar before playing in a handful of bands in Italy,

The new album`s artwork depicts a stylised worn-out sun with markings over it which for Native Americans those markings symbolised the passage of time. They had to tell time by the positioning of the sun. It would also provide Quarry with the inspiration to begin writing this latest album and inform its title. Although `Positioning The Sun’ doesn’t denote the passage of time, it instead serves as a repository to travel through space and time,  its songs sometimes landing in dark places, sometimes in brighter ones.

A strummed guitar and gentle vocals lead us into `Beyond Any Sense` which had a reflective texture and brought to mind bands of the ilk of Cast, The Coral, and Circa Waves, that whole Merseyside scene. There`s a similar feel to `This Is The Story` which tells the tale of a video chat between two friends. “One is depressed and is slipping into the quicksand of malaise,” Quarry explains, “while the other tries to lead him away from darkness and the dangerous no-go zone.” It does express a sense of helplessness with some really emotive vocals and kind of leaves you at the end to decide the outcome for yourself.

`New City Comes Along` was written “thinking of a beautiful city like Kyiv falling into ruin but could be any city destroyed by warfare. New cities will come along through the skin of the razed ones” says Quarry. The song really bursts into life with shimmering guitar riffs aplenty and some enchanting vocal harmonies as the it races along, a number that becomes quite hypnotic as it progresses. We have in `Kick The Void Outside` a number that according to the singer is shared “primarily from the perspective of two lovers taking shelter in a bunker from environmental collapse, carrying with them the utopian dream of an unspoilt environment to live in and with, remembering the days spent in nature that seemed to be endless”. A doomsday scenario but musically it`s anything but with a delightfully rhythmic bass line, infectious drum beat and a brief guitar solo towards the end and vocals that appear to give the situation a positive slant.

`Dream Free Dreams` has a fairly expansive feel and is quite rocky relating possibly to resisting the onrush of commercial advertisements for products or items we must own to make our lives’ complete. I thought `Breathe The Stars` was a bit of a mix match and didn`t immediately gel with me. It had a sort of stop start jagged nature and seemed to combine a number of styles before becoming a little anthemic in the latter part.

I read that `Freedom` came from the artist thinking “what if someone could restrict the already limited mankind’s freedom, stealing the light and sell it then just like any consumer goods? An exaggerated vision of how forces stronger than our rational mind can drive us toward an appearance of freedom.” It`s a bouncy and punchy piece that has a anthemic chant like sentiment about it. I felt  `Merge` was a pretty funky electric earworm although it seems it refers to dealing with feelings of guilt and how these feelings can ruin a nice day. A thumping listen all the same.

`Radio Inner World` has a wonderfully fuzzy touch which relates to an interesting situation or imagined story from Quarry where a radio tuned to the inner feelings of a man through a cybernetic implant, switching between songs depending on the mood, but only airing Motown. That’s the only condition he imposed to receive the implant. Odd but compellingly alluring. We have an uplifting rock out with `Higher Higher` which had a retro rock ambience or energy about it.

The album closes out with `Flash of Lightning `which is a stripped back introspective musing which has a folk like feel but explodes into life in the last sixty seconds or so. A captivating meditative track to conclude on.

There was shed loads to enjoy on `Positioning The Sun’ which was at times pensive, contemplative then irreverent, upbeat, and up[lifting and at times quite thought provoking. Quarry is an accomplished and talented musician and singer and should really be reaching a much wider audience. Hopefully, this album may accomplish that.

To me as they say in Italy, it was `Bellissima`

Previous article
BAND OF THE DAY: THE ABBEY
Next article
MARY, MARY