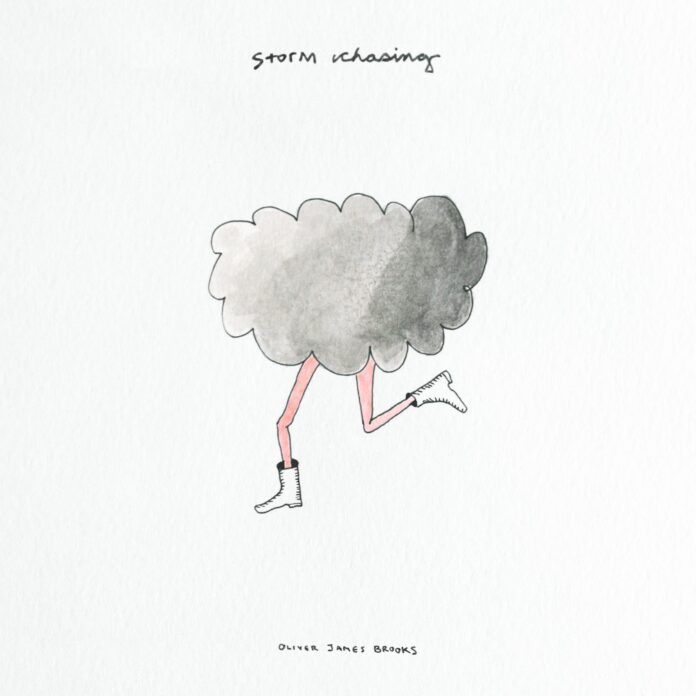 Oliver James Brooks is a Toronto-basedmusician from small town Ontario. Inspired by the greats such as, Neil Young, Bob Dylan, Joy Division and Elliott Smith, he focuses heavily on capturing sounds that are raw, organic, and real. His third full-length album `Storm Chasing` was released last month, written over the course of the last five years with some of the tracks having been composed while Oliver was living in Brooklyn, New York. It`s an album where he takes us on a musical journey reminiscing on childhood memories, sadness, love, and optimism.

The album opens with `Lead Foot` which the singer relates was written while sitting like a child in the backseat of his Grandpa’s Buick Century and is about moving on or passing through. It has some delightfully edgy guitar riffs and vocals that are shared almost reverently atop. We have a more introspective quite dreamy feel to `Two Best Friends` which the artist has said is about his two best friends his partner, Kiyomi Burgin and their cat, Baby. A quite captivating listen.

`See To It` has a drumbeat that leads us through like a beating heart along with a gently strummed guitar and quite mesmerising organ. There`s a resonating guitar riff that takes over intermittently throughout with a shook tambourine or similar percussive instrument. There does seem to be an edge or tense sensibility to title track `Storm Chasing`. The singer has been sober for over five years and before that he was, what he calls chasing storms . The track has a steady beat and intricate guitar chords which allows a platform for the gently shared vocal delivery.

`Just A Song` has a folk like texture about it. The vocals are again quite hushed and sung over a tranquil backdrop which does occasionally spark into life with a beaten drum, tapped tambourine  and reverberating guitar chords. I felt that `Forever Together` was quite mesmerising and had me drifting off as it evolved. A steady drumbeat, resonating guitar chords and vocals almost whispered.

I wasn`t sure of what to make of `In A Bad Kinda Way`. It sort of meanders along with musical instruments dipping in and out on route such as piano twinklings. Although it`s a little under seven minutes long it doesn`t tend to drag. We have a kind of repetitive almost tribal drum beat that leads us along the hypnotic and dreamy `You Once Were` which has some intricate guitar chords dusted throughout.

`A Place To Go` is another track that is quite spellbinding and will have you drifting off to another place or dimension. The album closes out with `Ya, Ya, No` a fairly fast paced and buoyant offering with some enjoyable harmonies. A quite positive and enlivening number to end on.

There was plenty to appreciate on `Storm Chasing`. I really enjoyed the drumming, keys, and guitar chords throughout and felt that the singer`s quietly shared  vocal delivery put me in mind of some of the ruminations of the sadly missed JJ Cale. There were some talented musicians that assisted the singer on this release with Gavin Gardiner (piano, wurlitzer, mellotron, percussion, backup vocals),  Andrew Kekewich (drums), Arnaud Brassard (wurlitzer), Sachiko Burgin (backup vocals) and Jenny Toni (bass),.

`Storm Chasing` is what I’d refer to as a grower and it`s a submission that i`m sure I’ll be revisiting in the not too distant future. So should you.