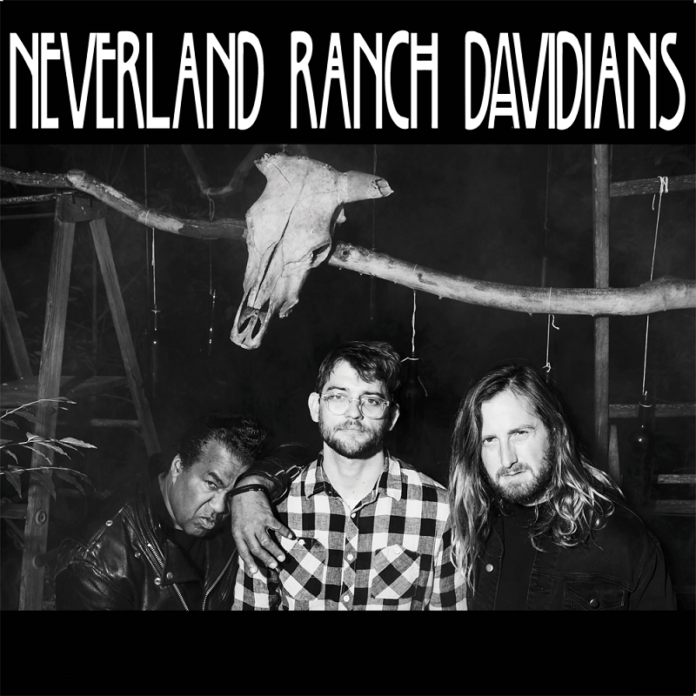 The Neverland Ranch Davidians describe themselves as “garage proto-punk reprobates on the 5th day of a 4-day creep”. The trio was formed by guitarist / singer Tex Mosley formally of Afro-punks Pure Hell, guitarist Will Bentley and drummer Max Hagen. A band whose name came from late 20th Century icons, Michael Jackson and ‘Waco Saviour’ David Koresh and are defiantly bass less.

Their self-titled debut album drops this month and has been portrayed as a blend of distorted psych, primal rockabilly, hairy-arsed punk, and chicken-fried soul.

The album opens with `Intro`  which is just that, four hundred and sixty six seconds of a kind of Stoner soundscape that felt like when you`re on a long flight and have that hazy engine noise in the background all throughout the flight. The album really kicks off with `Rat Patrol` and it`s what I’d call a road song. but the choice of vehicle in my head being a Harley HOG and we`re cruising the dust strewn desert back roads of America. We have fuzzy guitar riffs aplenty and a driving drumbeat with Tex adding his honeyed tones as we race along.

`Fat Back`  to me had a nigh on Hendrix vibe going on, a real trippy, out there offering. We have a practically spoken word diatribe on `Aqua Velveteen` where we enjoy some pounding drums and quite mesmerising hazy and at times screeching guitar chord riffs. The story shared is fairly unorthodox with lines like “She told me she`s from another planet, but after I heard that I knew I had to have it”  cracking stuff.

`Liquor Store` is a brief no nonsense punk rock outing, a real speedy headrush. I loved the title of the next track `Solid Monkey Blues` which was a laid back effortless but effective bluesy workout with lyrics that are shared in an almost haughty manner. Towards the end we get the repeated phrase of “Your monkey`s solid baby “ which to me was almost a retort to The Pixies “This monkey`s gone to heaven”

`Butts In My Beer` is something we `beer drinkers and hell raisers` all dread but here it`s a kind of instrumental retro rock n roll number akin to “That`s Alight (Mama)” on speed. We have a fairly hypnotic submission in `Boys Don’t Cry` which bears no relation to Gothic rockers the Cure`s track. It` a real slow burn with sleezy harmonies but at the same time wonderfully melodic.

`Hen House` is a delightfully bluesy funky soulful composition with vocals that sound like a mix of Kiss`s Paul Stanley and Living Colour`s Corey Glover, a really appealing earworm of a track. There`s a fairly edgy bluesy slow burn texture to `Stigmata` which is sprinkled with religious citations unsurprisingly. A stigmata is in Christian mysticism, bodily marks, scars, or pains corresponding to those of the crucified Jesus Christ, that is, on the hands, on the feet, near the heart, and sometimes on the head (from the crown of thorns) or shoulders and back (from carrying the cross and scourging).

`Knee On My Neck` is a bluesy rocky number that appears to refer to the American police`s approach to restraining predominantly black males with the use of a knee on the neck, which contributed to the death by asphyxiation of George Floyd. A song that recognises and shares this racist policy in a manner that`s not overtly preachy and in my opinion more powerful. We close out with `Believe To My Soul` which is a crossover of blues and gospel with some captivating vocal harmonies which is full of veiled innuendos alluding to the singer`s sexual prowess. The vocals brought to mind the wonderful blues rocker Robert Cray. A fairly amusing number to finish on.

I really loved the Neverland Ranch Davidians self-titled debut which has a real contrasting and varied range of musical styles. It`ll need a few plays before it seeps into not only your subconscious but your soul as well.

Allow this trio to convert you to their distorted psych, primal post punk, bluesy soul, I can testify that you won`t regret it.