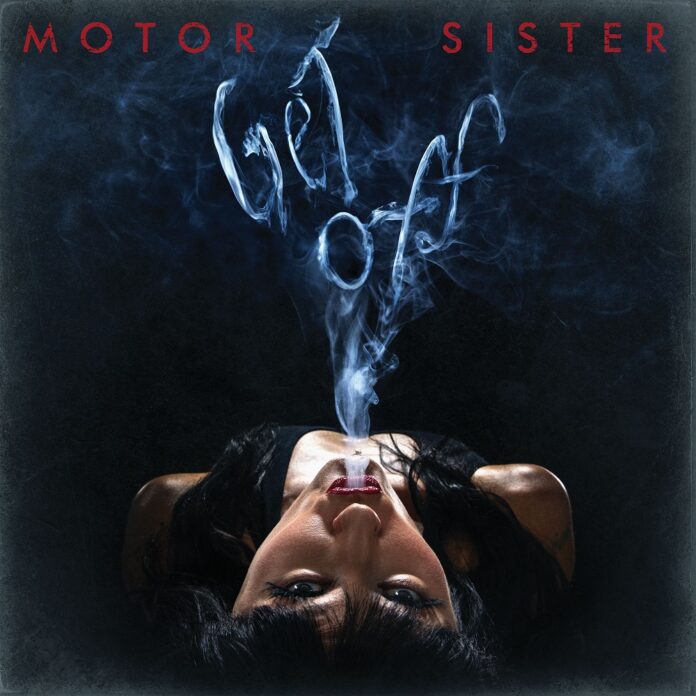 “The world’s going to fucking hell…..and we’re making rock n roll!” screams Scott Ian at the start of “Right There, Just like That”.

It’s fairly decent of Motor Sister to write the review for “Get Off” for me, to be honest.

There’s a back story, of course: Take one of Armoured Saint, take thrash metal royalty, his powerhouse vocalist wife, White Zombie’s old drummer and Mother Superior’s singer, and what do you get? Kinda, anyway. To go back further, Motor Sister formed when Scott Ian and Pearl Aday got them together to perform at Scott’s 50th. It was, by all accounts, ace, and an album followed. Covers of Mother Superior songs done live in the studio.

But, as Aday puts it: “We’re a bunch of songwriters with so much passion for the same kind of music, it just makes sense that we would make new music together.” Which pretty much catches you up, in honesty.

Now, forget all that and just celebrate the unashamed rock n roll of “Get Off”, because quite frankly, it is quite, quite fantastic.

Wilson and Ian can knock out riffs for fun, so they do. They stomp about on “Can’t Get High Enough”, the opening boot to the balls. Glam rock with a gut punch, it fits the vibe of the whole record, frankly.

They might actually knock the best out second song. “Coming For You” which Aday takes the lead on is so bursting to rock it starts with a solo that wouldn’t have been out of place in the Cathouse in 1986, and lets just say that when she sneers, “sucker, fuck you, pay me” you had best get your wallet out. If you’re streaming this on Spotify, be afraid.

Look this is hard rock, so it needs to have a bit of Thin Lizzy or AC/DC in. Happily the two greatest ever are mixed in one song, “Sooner Or Later”, sees Wilson live out his Phil Lynott fantasies, but this record has an attitude, baby. “Excuse Me, Your Life Is Exposed” thunders along a bit like an Armoured Saint song might, and there’s a bit more metal on “Lions Den”. It might have come from a modern Anthrax album.

This album though – broadly speaking – comes from a place where the band want to escape the crushing bleakness of 2022. “1,000,000 Miles” makes it clear, and its got a fists up, communal flavour. It’s line: “I got a list of all the things I hate, its 20 fucking pages long” seems to sum it up neatly, in truth.

“Pain” is a ballad that comes from the darkness, “pain is a bastard” sings Wilson. The White Buffalo built his career on this stuff, and “Every Rose Has Its Thorn” this is not. If that one is a little off topic, so to speak, then “Bulletproof” returns to the fast lane and dares you to beat it. You won’t.

If there’s been something of the biker gang with this all the way through. Just a little suggestion that what Motor Sister want to do is take you down a dark alley and rob you, then “Bruise It Or Lose It” (and I am telling you this is an AC/DC chorus they’ve found somewhere) makes that plain.

“Time’s Up” manages to add a little bit of southern boogie to proceedings. If ZZ Top wore leather, they’d do this, and the record’s one cover is Mother Superior’s “Rolling Boy Blues”, given some primal rumble.

If that one returns them to their roots in a way, then it’s the 11 originals that convince you that their instincts were right. “Get Off” is as good – and as muscular – as rock n roll will get in 2022.