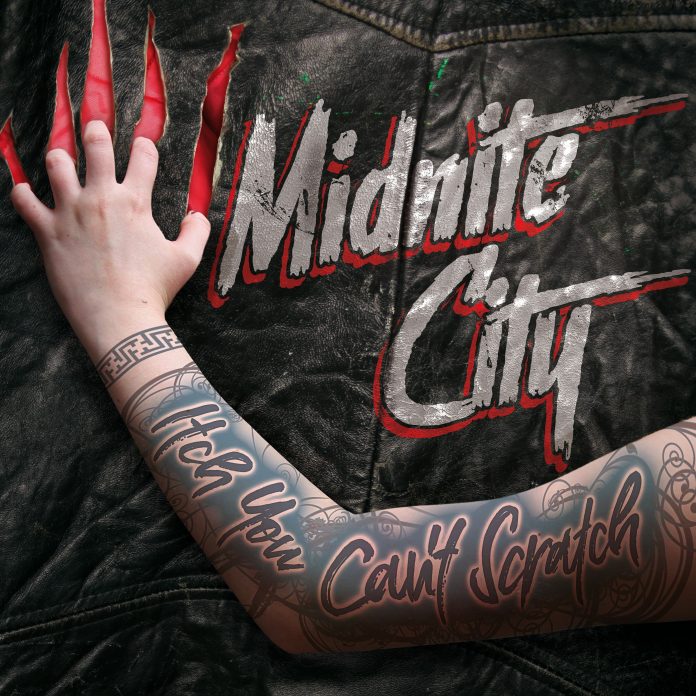 Like thrash bands and their superfluous “K’s”, then the glam bands, the sleaze bands (note, I will never use the phrase Hair Metal, I’ll close the site first) could never spell. So it was before you even looked at “Itch You Can’t Scratch” you did, if you were a certain vintage, understand what you were getting into.

Midnite City, looking at them, are of a similar age to your humble scribe – that is to say they too are a “certain vintage” – and I am prepared to bet you that they grew up with the same bands as me. The journey would have gone somewhere thus: Bon Jovi released “Slippery……” then they got into Van Halen, Kiss, Def Leppard and Poison and about a million others. Now in my case, and this is where I diverge.

This overt glam rock, AOR, call it what you like (just not hair metal as we’ve discussed) hasn’t been on my agenda for about 20 years. I go and see them when they tour, and I review the odd thing, but …largely no.

That isn’t the case for Midnite City – singer Rob Wylde was last seen by yours truly fronting Tigertailz, Pete Newdeck on drums was in Eden’s Curse the last time I saw him – and their love for their sound, for this sound, is infectious.

Opener “Crawling In The Dirt” will sort the yes’s from the no’s pretty damn sharp. This is 80s rock for people that think Collateral are a bit cutting edge. But the thing is, that’s not a criticism, because everyone here loves it like that and so will their fans.

“Atomic” couldn’t sound more like Def Leppard if it was called “Armageddon It” – but if you have had a love for this type of music then you won’t resist it. “Fire Inside” is the mid-paced ballad (there was always three sorts of ballads these type of bands did and the acoustic one is the one missing here). To be fair, FM have made a career out of this.

“Darkest Before The Dawn” is a bit sleazy, but also a bit of an arena shaker. And is a difference of opinion with Black Stone Cherry, who claimed that the darkest hour wasn’t always before the dawn – the type of thing that should be settled by Jimmy Tarbuck on Winner Takes All (and the last time I listened to an album like this that was probably on tv at my gran’s.)

“I Don’t Need Another Heartache” does the thing you know it will, “Blame It On Your Lovin’” has the air of a Thunder track from the early days, and as much as you try and find different ways of saying it, “They Come Out At Night”, is basically another song that could have been on “Hysteria” in truth.

Now, we’ve had a little bit of fun here and maybe haven’t taken this too seriously, but there’s one thing that needs to be said: Midnite City are fantastic at what they do. “Chance Of A Lifetime” doesn’t sound like it came out in 2021, its not supposed to. “If It’s Over” is the big power ballad one – taking its cue from the likes of “Always” – while “Fall To Pieces” ups the gear, and is delivered with the touch of class the rest of them have.

Look, “Itch You Can’t Scratch” isn’t going to change anyone’s life in all likelihood, but it proves two things to still be true. When people play the music they love its irresistible, and more importantly it shows that the received wisdom that Nirvana released “Smells Like Teen Spirit” and the world was into grunge overnight, to be the load of crap that I believe it to be.