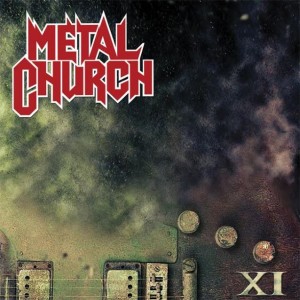 When thrash metal legends Metal Church released their debut album 32 years ago it would have been hard for them to imagine that they would be still going for this length of time. In fact it would have been almost unthinkable for any metal band in the early 1980’s to believe that this thing called Heavy Metal would last as long as it has.

Although Metal Church may not go down in history with quite the same column inches as the Big Four they have nonetheless played a vital role in keeping the genre alive through all the trends and sub-genres. They never got the credit at the time and one could fear that they won’t get the kudos this time around either.  Of course several line-up changes and retirements haven’t helped their cause. One listen of XI though may turn that around.

If we gloss over the unimaginative title and the fact that essentially it’s the same sort of record that Metal Church have made their career out of then what we are left with is some premier league thrash metal from a band that know all the tricks of the genre and how to utilise every facet. Who doesn’t like that?!!

The album starts with the buzzsaw riff of “Reset” guitars that evokes early-Megadeth at times, that said it’s vintage Metal Church that hits all the right buttons. A fine start.  “Killing Your Time” follows and the band are well and truly out of the blocks. The chorus is repetitive but the verses deliver all of your headbangin’ needs.  Mike Howe’s vocals have never sounded more metal than they do on this album and that’s never illustrated more vividly than on the album’s best track “No Tomorrow”.  A slab of pounding heavy metal that would have been a classic had it been released 30 years ago.

The tempo doesn’t change with the excellent “Signal Path” which is reminiscent of some of the band’s finest work over the past 30 years.  When it does drop though, like with “Sky Falls In” & “Shadow”, the heaviness and intensity remain but the pace is replaced with a menacing sense of foreboding.

For balance there are a couple of tracks that don’t quite live up to initial promise. “Shadow” has a promising opening section before becoming a little lacklustre when it comes to the chorus.  Similiarly “Blow Your Mind” suffers with the comparable symptoms.  These are minor quibbles though on an otherwise excellent album from a band that should have nothing to prove but nonetheless keep progressing whilst retaining their old school authenticity.

With contemparies such as Accept producing great albums there is no reason why Metal Church cannot force their way into the leading pack and if you have never previously worshipped at the altar of Metal Church then 2016 would be a good time to start.

XI is released via Nuclear Blast Records on 25th March 2016