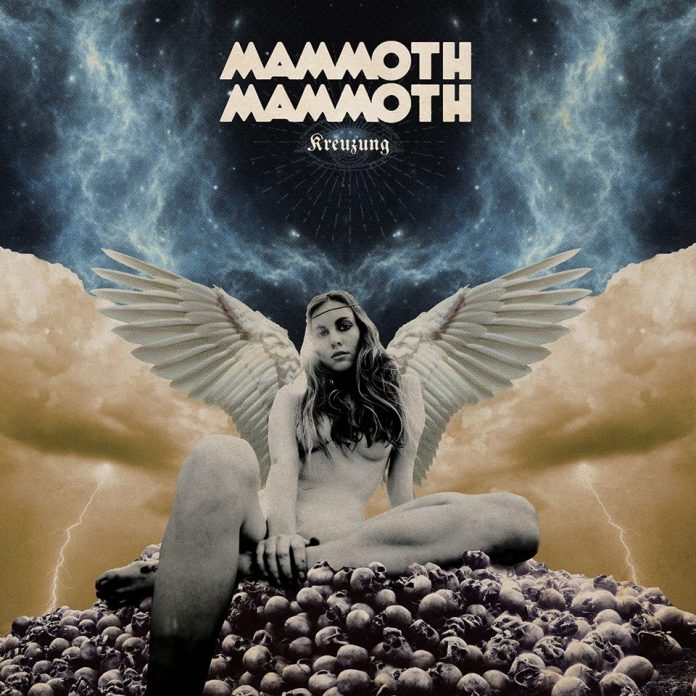 Kreuzung – and I can barely speak English so I did have to look this up – is German for “Crossroads”.

In the context of it being an album from Mammoth Mammoth, you did wonder what significance that might have.

The German: that was easily explained, Mikey Tucker the singer and Bones the drummer moved themselves to Berlin ahead of 2017’s “Mount The Mountain”.

The “crossroads” thing…..,more open to interpretation, in my book. Were they doubting themselves? Unlikely, they just don’t seem the type. 2015’s “Hammered Again” was one of the most outrageously good pure sleazy records of the decade and “….Mountain” although more nuanced (and by that I basically mean that it didn’t have songs on about microwaving the cat after a meth binge) it was still magnificent.

But then, two of the band members – Marco Gennaro (guitarist) and Kris Fiore (bass) –  are brand new as original guitarist Ben Couzens and bassist Pete Bell have both left, so maybe, just maybe, even the most strident, confident of units might have doubts.

It takes about five seconds of opener “I’m Ready” to put you straight. It sounds like Motorhead have sniffed a lot of glue and are ready for a fight. They don’t seem to care who with. Just know this, when Tucker sings “and I will drink you down like an Irish stout” it sounds like a threat. A bizarre one, but make no mistake it is one.

I hate invoking the big guns straight away – and you do worry if you are only doing this because they are Aussie (or at least Bones and Tucker are, I don’t know where the other to hail from) but “Wanted Man”, there’s no dressing it up, sounds like AC/DC and Airbourne. It does, face facts.

Gloriously “Motherfucker” sounds precisely like you want an MM song with that title to sound. It’s punkier than the other two, and well might it be too. “Screamin’” is sleazy, and woe betide the object of its lyrics.

But you know this “crossroads” thing we spoke about, right? This is a slightly fuller sounding record than some in their back catalogue. The title track pulses, chugs and rolls long on an electro pulse, darker, it even broods. Post something or other to the boffins no doubt, while there is a fuzzy, kind of stoner rock feel to “Tear It Down” and there’s actually an acoustic opening to “Tonight”. Then, almost as if they realise this is a step too far, Tucker screams and they “wanna get high tonight”.

Mammoth Mammoth, though, are one of those bands. One that you feel has gone ever so slightly under the radar, while inferior ones get plaudits all over the place. The last quarter here sort of underline and reiterate this.

That is to say, they are no deep cuts. “Mad World” spits its lyrics. Taking something (anything? Everything?) to task. “Let’s Go” shows the differences in guitar sound, which have been apparent throughout, at their peak, and “Lead Boots” is one of them that Mammoth Mammoth do that just sounds more epic than you think. Phil Campbell and The Bastard Sons do this kind of buzzy hard rock and it has just a touch of Black Label Society about it too.

The last one, though, in true live concert style, is the best. “God’s Gonna Hate Me” somewhere between mid-period CoC and “Youthanisia” era Megadeth, it also has a cracker of a chorus. And if you are anything like me, you probably will freak the woman who does social media out for your firm by singing “I’ve got a feeling the more that I pray, God’s gonna hate me anyway” (and, pro tip: don’t try and make it better, the next day, by telling her that the best Christmas song is “There Ain’t No Sanity Clause” by The Damned and explain to her the first line of that is “Scabies got rabies, he’s down on all fours….”)

But I digress. The fact of the matter is Mammoth Mammoth rule and far from being at a crossroads, they seem remarkably sure of themselves.