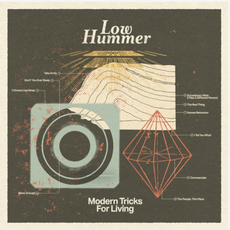 The sextet Low Hummer are a fusion of hard-edged electronica indie rock who are based in Hull, East Yorkshire, famous for its white telephone boxes, the Humber Bridge, and its connections with the poet Philip Larkin. They comprise Dan Mawer (vocals/guitar), Aimee Duncan (vocals/guitar), John Copley (guitar), Jack Gallagher (bass), Stephanie Hebdon (keyboard/guitar) and Joe Gray (drums). They release their debut album ‘Modern Tricks For Living’ this month which the band relay is an observational account of the lives of this group of people, their hometown, the shared passions, and interests that brought the band together, the lives of those around them and the forces, known and unknown that impact those lives

The album opens with `Take Arms` which has a buzzy synth underlying the vocals which are delivered in a kind of aloof angry diatribe railing seemingly against life in the North as perceived by the narrators. They seem to be encouraging participation in possible political action to improve society rather than just sitting back and getting drunk. We have in `Don`t You Ever Sleep` a much more post-punk anthem for the disaffected youth with nowhere to go and nothing to do. It had that sort of mechanical hypnotic guitar riff throughout that really remined me of David Bowie`s `Fashion`.

`I Choose Live News` seems to almost be `Groundhog Day` put to music. There were some really rock out moments during this invective of new day, same shit. Some slightly off kilter keys and guitar chords lead us into `Never Enough` with Aimee Duncan`s delightfully dreamy vocals relating a positive and a times subliminal message of not being afraid and taking control of your life. A wonderfully mesmerising submission.

`Sometimes I Wish (I Was A Different Person) ` has a more electronic vibe with Aimee this time relating how television and social media can overtake and inform one`s opinions if permitted. A track that seemed to have the essence of nineties post-punk band Elastica. The electronic texture is retained on `The Real Thing` a sort of gushed observational outpouring on individuals habitual lives and how they’ve ended up there. Maybe generationally acclimatised to accept disappointment.

`Human Behaviour` had a retro feel about it and could have come straight out of the sixties. A wistful and dreamy submission about fearing loneliness and loss. We have some delightful garage rock guitar chords floating through the beginning of `Tell You What` which is a fast paced rhythmic electronic piece. Singers Dan and Aimee trade nigh on personal likes and dislikes and seem to confess that they can change, maybe in order to win each other`s affection.

`Slow One` has a captivating somnolent feel at times with a rhythmic backbone of bass, drum beat, guitar and keys allowing the vocalists to again exchange characteristic and possibly intimate observations of each other and then encouraging them to let it go, maybe grow up. We close out with ‘The People, This Place’ which according to the band, delves into the themes of social isolation, manipulation, and alienation. It`s another frenetic, conversational, propelling breakneck anthem.

There was much to enjoy on ‘Modern Tricks For Living’ where we were offered some wry social commentary against a musical backdrop of post-punk electronic indie rock. I really loved the use of dual vocalists and how they performed not only individually but how they seemed to spark something from within each other when they swapped lyrics. This was a stunning release and especially as it was the band`s debut. A band that are definitely worth keeping an eye on.