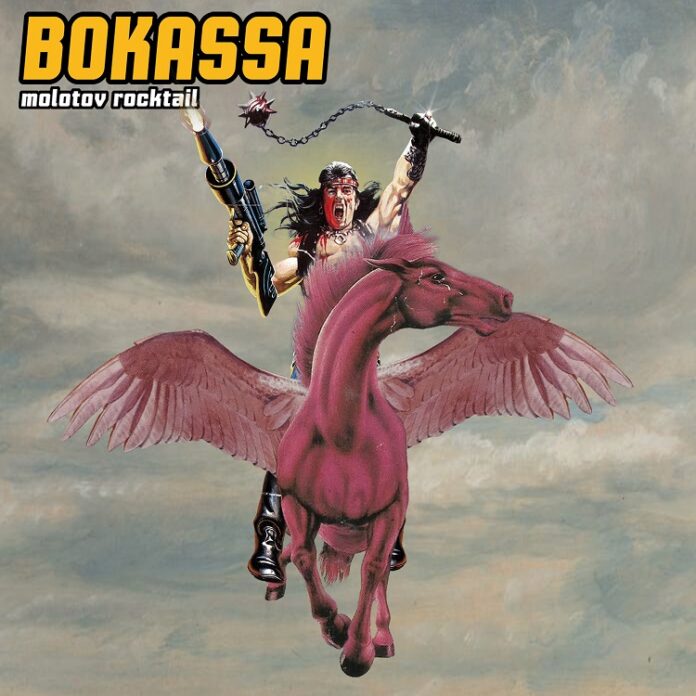 I am about to make a bold claim – you ready? I am not shy of hyperbole, but I’ve got to say this: Exclude the Maiden’s, the Priest’s and the Saxon’s and Bokassa are the best metal band we have in 2021.

And for the next 600 words or so I am going to tell you why.

Essentially, they are what MV would be if we were a metal band, that’s why.

Everything we’d stand for if we were in a band, they do. Hooks? Mate they’ve completed it. Lyrics that you wouldn’t have thought of (and go, “what the hell did he just say?” Spoiler alert: what you thought you heard, you did), the shortest attention span in the world? Songs that are so catchy the record probably comes with a free mask, and titles for those songs that are totally unlike anything you’ve seen anywhere else.

That’s all here. In fact, it’s all in microcosm on just one four minutes and 16 seconds called “Hereticules” during which Jørn Kaarstad reckons he joined the “Mormon Church to fix up my life, I went back home and I’d got nine ex wives”. Now, to be honest that’s enough to get bonus points,  but add in the fact it also has a proper Hatebreed style beatdown, which is followed by trumpets and ladies and gentlemen, we have a winner.

Except that this most stunning of things ain’t finished there. Not by a long shot.

“So Long Idiots” is what would happen if Stone Sour went punk. “Pitchforks R Us” does a kind of Wednesday 13 graverobbing thing, and – as much as I love W13 – I am saying this is better. “Low (And Behold) gets pissed and does a few lines. And if Josh Tood had started “Lit Up” with the words “I am a God motherfucker” and followed it up with “there’s no tomorrow doing Jagerbombs” then maybe Buckcherry could really party.

To be serious for a sec, to describe the sound of Bokassa is like trying to nail water to a wall and trying and stifle them would be like trying to limit the imagination of a three year old. I mean, you could, but why would you want to? They are having fun, the fun you wish you were having, frankly.

“Godless” has a touch of QOTSA, but then they’re screaming “loose lips sink ships” for no reason that you can fathom. In fact, the only band that’s close to this level of creativity and WTF? – ery (as it were) were Faith No More at their most batshit. There’s a bit in the title track that even sounds like Patton and the boys in the “Be Aggressive” days. “fuck your band and fuck your hypocrisy” goes the backing vocals (and where they came from Lord knows) you don’t even recognise Chinese democracy” (I was always an “Appetite For Destruction” man, but whatever). There’s even something biker metal about “Burn It All (P.T.S.D.E.A.D)” energy? Like the Hellacopters debut, pal. And a spot of pop punk too.

Choosing a favourite on a record like this is a stupid thing to do. That said “Careless (In The Age Of Altruism)” might well be the best song of 2021, just for this: “I go to South by Southwest with my headphones on, I don’t know what they are playing, I just know that they are wrong”. Take that you po-faced indie hipsters.

“Code Red” is ace too, that’s a given at this point, right? “Immortal Space Pirate 3:  Too Old For This Sith” merrily nails desert rock, and offers “you cannot kill what won’t die”. Now, that could apply to metal itself, to be honest, but lets not get philosophical.

Instead lets just say this: Bokassa are, as it stands, the most innovative band in the world. Their last album “Crimson Riders” was exceptional. This one is better. “Molotov Rocktail” might well be the best album of the year.