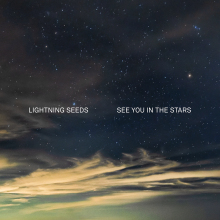 I was a bit taken aback when I learnt that it was thirteen years since Lightening Seeds last released an album. Ian Broudie was always able to create a pretty catchy, hummable Indie pop rock tune so I was looking forward to hearing what there was on the new release `See You In The Stars` out this month.

The album opens with `Losing You` with some delightful twangy guitar riffs and swiftly shared vocals atop giving a feeling that this pop maestro has never been away. A nice gentle light breath of fresh air to lead us in on. We have in `Emily Smiles` a song that was co-written with Specials frontman Terry Hall, Another upbeat tune written about “miscommunication and lives being changed by small moments and random events, it’s about desperation and the distances between us being unlocked with the magic inside a smile.”

The singer has said that `Green Eyes` felt like it was a postscript to Pure and I have to say that when I listened to the track I was thinking i`ve heard that track before. The addition of the brass like synth note was what really made it for me on this otherwise quite introspective piece. We have a further co-write, this time with The Coral’s James Skelly on `Great To Be Alive`. It has a sort of strum or stroll about it that reminded me a little of the stuff that The Coral are so adapt at.

`Sunshine` according to the singer is “about the sun being the source of life. I’ve had many dreams worrying about the future of an uncertain world, but then the sun shines and everything feels more positive and hopeful.” It`s a fairly rousing inspirational anthemic piece which brought a little warmth into the grey autumnal day when I was listening to it. There`s a much more deeply reflective perspective to `Fit For Purpose` which has some really complementary strings shared throughout,

`Live To Love You` is the second number on this album that the singer wrote with James Skelly and it`s a dreamy melodic piece that seems to be a kind of romantic affirmation. There`s a drum machine beat that leads us along `Permanent Danger` with strummed guitar, synth tinges and what sounds like bongos or tapped percussion. Although there`s plenty going on, the track is quite dreamy and enthralling.

I read that `Walk Another Mile` is about two imaginary people arguing about the end of a relationship and blaming each other. It`s a fairly light mid paced melodic pop like outing. The album closes out with title track  `See You In The Stars` which was written almost as a tribute to a friend of the singer who passed away. It`s a thoughtful and considerate eulogy with a dreamlike hopeful vibe.

`See You In The Stars` is a welcome return to Lightening Seeds and it has it`s kind of yin and yang moments throughout with some really upbeat tunes and some more reflective and thoughtful life musings. After listening to this new offering a few times , i`m really looking forward to hearing a few of these tracks when the band hit the road later this month. I`m sure you will too.