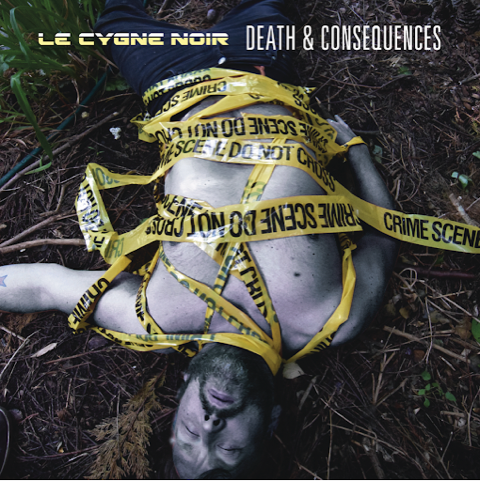 I have to admit that I had some initial misgivings as to whether to review this extended play which is a special Halloween release from the enigmatic Le Cygne Noir (The Black Swan).

The release opens with `Burn Bundy Burn` with street noise and a car starting up before the number races along with a quite deep and husky vocal shared over a tune that reminded me a little of Squeeze`s `Cool For Cats on acid`. It veers off for a brief reggae interlude with accompanying saxophone before returning to its prior journey. The lyrics do have a slight moralistic tone while relating to the killer`s vanity and eventual execution via the electric chair. The song closes out with some delightful sax tones. There`s a hint of Kasabian`s `Shoot The Runner` with `Under the Floorboards` a cracking dark, disturbing and broody tale.

We have a kind of respite with a fifties tinged instrumental `Tino Talking` which has some immense echoey almost resonating guitar riffs that almost head into surf rock territory and what sounds like a Hammond organ. A most welcome interlude.

`Dancing On Your Own` is wonderfully compelling and drew me to it as a moth to a flame. It has a synthy electronic base with breathy vocals shared atop. To me this track could easily have replaced Q Lazzarus’ `Goodbye Horses` in Buffalo Bill `s dance scene in Silence Of The Lambs. This offering closes out with `Killing Time` which is a superbly hypnotic trippy electronic track but spliced with aural soundscapes with some female vocals adding to the poignancy. A number that I thought tipped it`s hat to Alabama 3.

I have to say despite initial doubts as to the subject matter, Le Cygne Noir really won me over with this well thought out and delivered range of fascinating songs. The artist had some talented special guests to flesh out his creation with Neil Taylor (Tears for Fears/Morrissey), Alex Veale (Tax The Heat), vocalist Jo Nye, Charlie Jones (The Cult/Goldfrapp), Mikey Sorbello (The Graveltones/La Roux), Danielle Gulino (Roxy Music), Samson Jatto (Maverick Sabre), Mark Gemini Thwaite (Peter Murphy/Gary Numan/The Wonderstuff), Alan Wilson (The Sharks), and saxophonist Dave Colbourne.

A Halloween EP is a novel idea and one that we should all applaud and support.