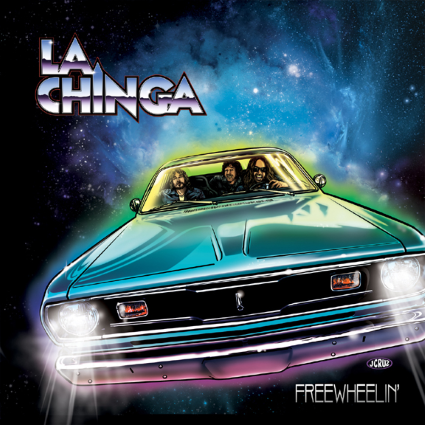 Bernard tips these Detroit boys to do very well

Over the years I’ve bought a few CD’s from Small Stone Records. This Detroit based label has been going over 20 years now and has released lots of great guitar based records in that time from bands including Dixie Witch, Fireball Ministry and Five Horse Johnson. So when this new album from Vancouver band La Chinga appeared for review I immediately took note when I saw it was a Small Stone release. The band is a three piece drums/bass/guitar affair and they have a heavy 70’s feel going on throughout the album.

‘Gone Gypsy’ opens matters and this is a great track with an Aerosmith swagger to it. ‘Snakehead’ has an intro that could come from a latter day Clutch album before ‘White Witchy’ swings into view with its continued Aerosmith influence. ’Stoned Greased White Lightning’ has more of the same before things really start to get interesting. All of a sudden it seems that Led Zeppelin have hijacked the recordings with a couple of the Marshall Tucker Band in attendance as well. ‘Faded Angel’ has an acoustic intro before the full band crash in with a Southern sound that proves to be one of the best songs on the album. ‘Mount Mama’ then moves into Led Zeppelin IV territory with its acoustic sound and a Robert Plant vocal before ‘KIW’, a song that could have been a Physical Graffiti out-take. ‘War Cry’ and ‘Right On’ rattle past before ‘Dawn Of Man’ closes the album.

This 10 minutes track is a guitar feast that reminded me of Eddie Glass’s Nebula with its spacey desert rock riffs and solos – it’s excellent stuff. Whilst I’ve mentioned a number of other bands within the review to try and describe the music, it needs to be said that La Chinga have a sound that is all their own, they play great and the album is well produced and recorded. I see they are about to tour Europe but this does not include the UK – let’s hope they put that right soon as with some regular touring over here I think they would do well.