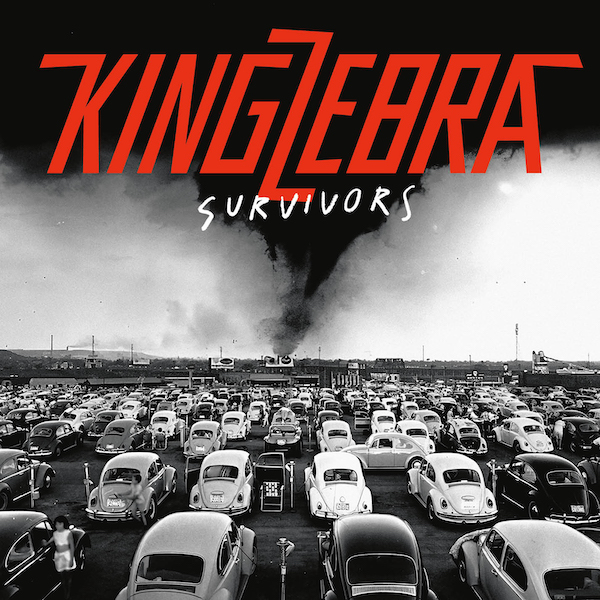 “Survivors” is the debut full length from King Zebra. There’s been a couple of EP’s and some gigs since they formed in 2017 (indeed, no doubt there’d have been some more were it not for the pandemic) but it doesn’t feel like a new band.

Rather KZ have emerged from Switzerland on a mission, it seems, to single-handedly revive arena rock (it’d be tempting to say “stadium” there, but let’s not overstretch ourselves). There’s a bit on the Whitesnake-ish “She Don’t Like My RnR” that sort of explains it: “lets worship in the temple tonight!” sings Eric St Michaels (ex of China) before Roman Lauer thunders the sort of guitar solo that would make Doug Aldrich blush, frankly.

And, I am here to tell you that this is not a mistake. The use of “worship”? I am going to go out on a limb here and say that to these boys, this is a religion. Listen to the sleazy “Under Destruction” – the track that kicks off the record – and tell me that they weren’t listening to the same records as you were as a kid.

That’s important too, because so big, bombastic and fist shaking are songs like “Desperate” that this kind of demands that you know the form, the formula, if you like. If you don’t like 80s rock, then its not too much of a leap to say that this isn’t for you, but then, the band accepts that too.

“Wall Of Confusion” becomes a vehicle, almost for the voice of Guernica Mancini (who guests on the song) and the tie-up makes perfect sense when you think about it, given the respective sounds of the bands.

There’s a neat line in filthy sounding stuff too, “On The Run” begins with a solo that echoes LA Guns, while the bass of Manu Judge is the bedrock of the anthemic “Rush” (and surely it can’t be just me that spots the lead that is straight off “Eliminator” ZZ Top.

Kudos to them too, for the utterly ludicrous “Hot Cop Lady” – I mean this genuinely, and without sounding too much like some old bloke with a website, no one makes music like this anymore. David Lee Roth might if he released solo records still, but you’ll be in a reverie thinking off all the bands from Slaughter to Danger Danger who you used to adore.

Mention of the Double D’s (and the thought of my late mother, who was the most naïve woman on the planet) marching into Virgin records in Birmingham 30 years ago for me and asking the fella “excuse me, do you have a record called “Screw It” is still amusing) is deliberate too, considering the de facto title track “We’re The Survivors” could be one of their songs.

“We Are One” sort of goes into an “Immigrant Song” thing, but doesn’t quite get there. What it does do, though, is change tack to taking on the world rather than celebrating rock n roll – and it suits them, in truth.

“Be The Hunter” is the one you imagine they’ll encore with. Huge, unapologetic and made to be played live, and you know what? It’s brilliant, like the rest of it.

“Survivors” is well named too. Because 30 years ago Kurt Cobain loaded up his guns and brought his friends. The bullshit narrative of every rock doc since is that as soon as he did glam rock died. If MV ever campaigns for anything then let it be to disprove that myth. King Zebra know it, and anyone who listens can’t fail to hear it. This has earned it’s stripes.