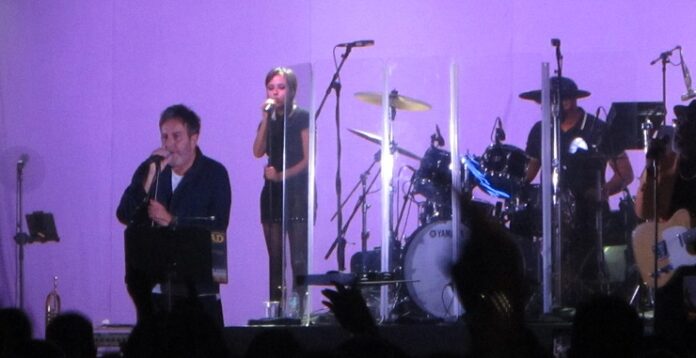 Tonight, was a strange one for me. The last time I saw the Specials was over forty years ago on a two-tone package with the Selector and Madness in support. It was a crazy night, and you knew that all three bands had that something special.

Support for tonight is local singer songwriter and musician Pete Williams. The name may not be instantly familiar, but Pete has been an integral part of three bands that I was lucky enough to witness live and have such warm memories of. He was the teenage bass player in Dexy`s Midnight Runners when to me they were a proper band, intense and soulful ala `Searching For The Young Soul Rebels` which was the best debut album ever. He left to form The Bureau with their powerful brass-driven soul sounds, and then the short lived These Tender Virtues. Since then, Pete has flown solo apart from brief reunions with Kevin Rowland (Dexys). I`d not managed to catch Pete solo so it was a bonus to realise that he was special guest this evening. He arrived on stage with his band and lead us through a thoroughly enjoyable thirty five minute set. Amongst the numbers tonight were the retro rocky `So Far So Good`, the autobiographical `First Real Job`, the nostalgic `Are You Listening? ` and ending with the intensive `Black`. A well-received set but I’d love to see this fella in a more intimate setting, hopefully our paths will cross again real soon. In the meantime, Pete has three albums that further showcase his creative musical talents.

The tension was building all night with this sold out crowd in anticipation of Coventry`s finest and the shouts of `Rude Boys` died down as the lights dimmed and `Freedom Highway` pours through the pa, an old Staple Singers number and a track that will be on the band`s forthcoming new album “Protest Songs – 1924 -2012” released next month. The place goers into meltdown as the three remaining original band members, Terry Hall, Lynval Golding and Horace Panter, tear into `Rat Race`. We have a couple more crowd pleasers with `Friday Night Saturday Morning` and `Stereotype` before the pace levels out with numbers like `International Jet Set` and `Man At C&A`.

Lynval Golding steps up and delivers a wonderfully passionate and emotional, slowed down version of Bob Marley and Peter Tosh`s anthem `Get Up, Stand Up` before the guys provide the Fun Boy Three`s `The Lunatics (Have Taken Over The Asylum) `. The highlight of the night for me was `Doesn’t Make It Alright` a song that has as much relevance today as when it was released over forty years ago. A song that Stiff Little Fingers also include in their set.

The final stretch of this evening was a dance fest with `A Message To You Rudy`, `Nite Club`, `Too Much Too Young` and `Gangsters` before a cover of Toots and the Maytals `Monkey Man` brought proceedings to a close.

It`s not long before the band are encouraged to return and they do so with Hannah Hu, a young singer from Bradford performing a superb version of Talking Head`s `Listening Wind` another track that will be on the forthcoming album. The final numbers of `Ghost Town` and the Clement “Coxsone” Dodd` written `You`re Wondering Now` follow and that`s it. It was quite a nostalgic evening for me and brought back certain youthful memories. The guys still retain that sardonic wit and can still deliver a show that`s up there with the best of them.

How would I best sum up tonight`s entertainment.