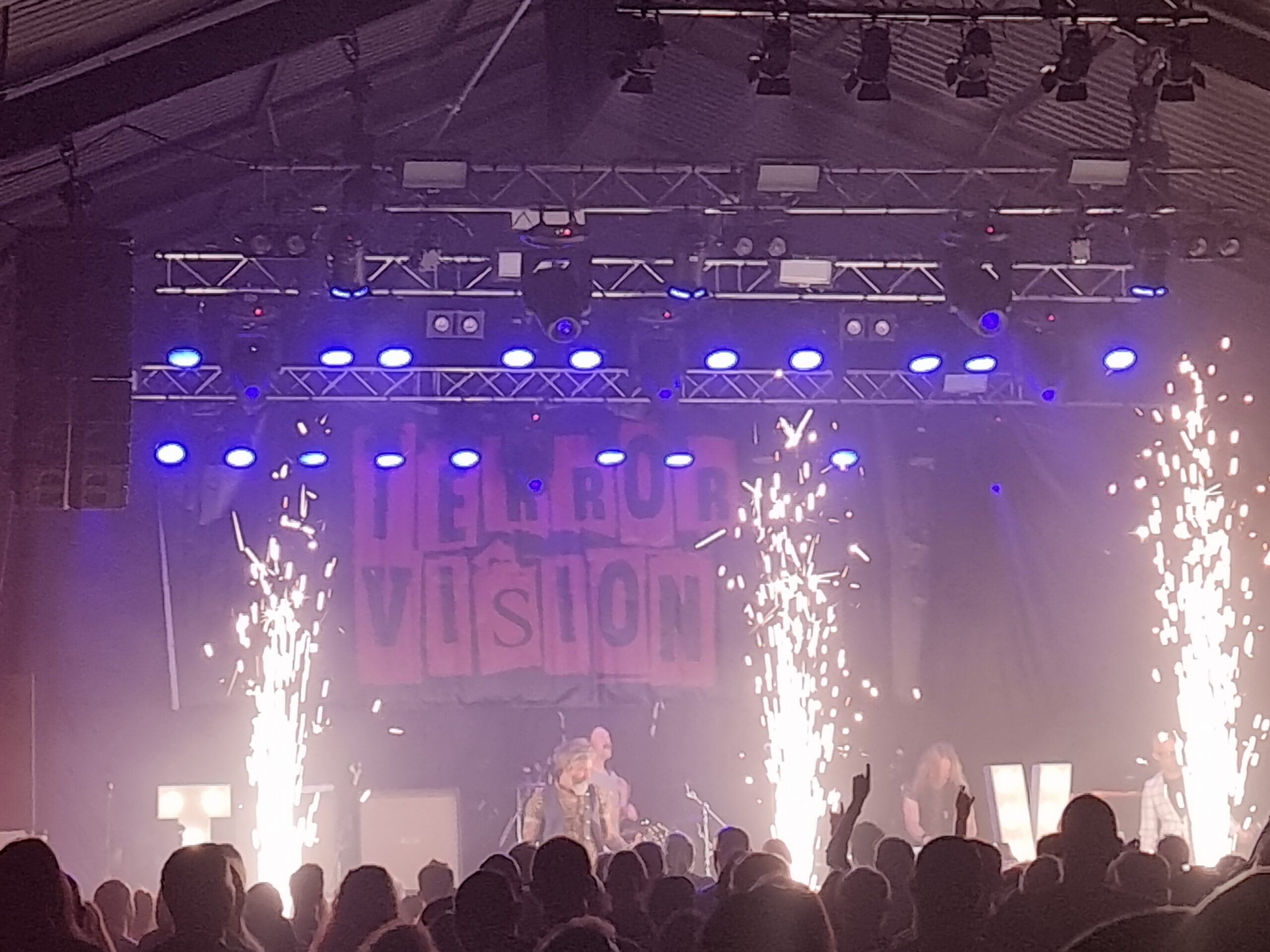 It’s about halfway through the set when Tony Wright says it. “How rude!” Exclaims the frontman of Terrorvision for 35 years (and Lord knows how Terrorvision and us got so old) “we’ve not told you who we are!”

What follows is an adaptation of one of the keystones of UK rock music: “Tonight Matthew, we are Terrorvision, from Bradford.”

Now, there’s two things here, and as an aside one of the Mark Yates had been reminding of Matthew Kelly all night (and Tony doesn’t half look like Earl Hickey from My Name Is Earl these days) but most importantly, it almost means that life is back to normal.

They’d referenced the pandemic earlier in the night (“we’re all two years younger than we actually are, those last couple didn’t count”) by dedicating “Friends And Family” to the virus, but now it seems more than ever that Terrorvision matter. They matter because they are fun, they always have been, and they always will be.

It’s five years since MV had seen them headline (a support set to The Levellers in the West Yorkshire sun was brilliant in 2019), but just like all the other times we’ve seen them over the course of the last 30 years, you know what you’re going to get – and they never let you down. Ever.

So tonight, for 90 minutes, you can get lost in a reverie of “Discotheque Wreck”, “Pretend Best Friend” and “Celebrity Hit List” – a first three most bands would kill for- and that’s before “Alice, What’s The Matter?” and “American TV”, but before this becomes a list of songs and nothing more, it’s worth pointing out for all the fun the crowd are having (and arguably deserve) the band look like they are reciprocating. Maybe it’s because they have other jobs these days, maybe its because they are just happy to be out of the house, either way, there’ll not be a happier show anywhere this year.

Interestingly, for a band that hasn’t released an album since 2011, there’s a sprinkling of new material tonight, one appears to be called “The Night That Lemmy Died” a punky smash and the other isn’t named, but both are mighty, and show what this band might do in the future.

But, what a past, though. “If I Was You” was always a favourite, and “Josephine” is the barmiest, catchiest song you ever did hear, and that’s before you get to the massive hits. “Tequila” (and I was there the night they passed round the drink at JB’s to celebrate it going to the top) the insanely good “Oblivion” were just that, but they end with “D’Ya Wanna Go Faster?” and a spray of fireworks for about the tenth time tonight.

That’s not the encore, though and lets be honest, we all know what is: the one about the whales and dolphins, whales and dolphins, yeah and 25 years old it might be (and it was to buy that single that I drove my first car for the first time) but it’s still an absolute copper bottomed classic.

And Terrorvision are a classic band. It’s worth remembering the landscape back in 1993 when their debut came out. There were some big bands in the UK then, The Quireboys, The Almighty, Little Angels and Thunder – all brilliant and most still going, but it’s the lads from Bradford that look like they might enjoy it most of all.

As Carly Simon plays them offstage like she always does, its tempting to think she might be right. To paraphrase, nobody has ever come close to doing this type of thing better than Terrorvision.