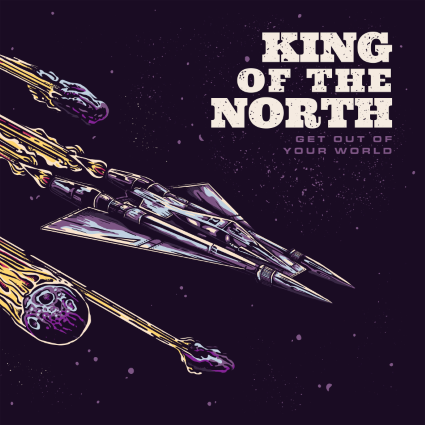 Sometimes you just know. Take the opening of “Rise” the first track on the second album from Australia’s King Of The North. It bides its time before crashing in on a wall of riff-based sound that would make even the meatiest, testosterone fuelled rocker get their fists in the air and proclaim their new favourite band, it becomes obvious that King Of The North are here and desperate for you to understand they’ve arrived.

But then, sometimes, all you know is bollocks.

Because – and this is the really clever bit – King Of The North are a two piece – Andrew Higgs plays guitars bass and sings, with Danny Leo or Lucius Borich. Not like the Graveltones, Royal Blood or The Picturebooks (great bands though they are all are) because where most two-piece outfit’s want nothing more than to mine the depths for primal cool, KotN are concerned only with huge.

Huge riffs, huge choruses, bigger intentions still. Here is a band that doesn’t just want to play arenas, but rather to take a wrecking ball to them and smash them down.

There is an explanation on the accompanying blurb as to how Higgs does this – something to do with 3-in-1 pedals or something. Frankly MV isn’t the remotest bit concerned, instead we are just bothered with listening to the damn thing and shouting “hell, yes”. A lot.

The title track finds Higgs in full on Audioslave mode, howling like Chris Cornell just for fun, “Love Like Fire” doesn’t see why anything should be demur, while “Burn” thuds and thumps its way through something massive and can best be described as a roaring success.

Actually whatever this absolutely magnificent collection attempts, whether it’s a more blues orientated groove on “Hard Wired For Hard Times” or a heads down boogie of “Ride Like Your Free” it does so in such a way that you can’t fail to be swept along.

There’s a line on the latter that seems, in a way to sum the whole escapade up: “amped up and I’m dropping in/another dose of adrenaline” suggests Higgs, and really this turbo charged biker rock with a Space Shuttle chaser.

The crushing drumbeat that ushers in “Down To The Devil” is matched only by the even more crushing guitar, and as the hook soars, it is entirely evident that KotN are very special indeed. “Caught Between Two Worlds” is not something that Higgs has ever been, as he seems to know instinctively what he wants, but this one does add some fine harmonies, before “Hard Times Are Done” settles back into a kind of Led Zep groove where you just know this band are happiest and “No Stone Left Unturned” really lets itself go and is glorious jam type of instrumental that surely would sound mighty fine live.

The ending song on this uproarious shindig is “Manic Depression” as Higgs pays clear tribute to his idol Jimi Hendrix – he does a superb job too, as he does throughout. See, this King of the North thing is all very well, but the North might not be big enough to hold them soon.