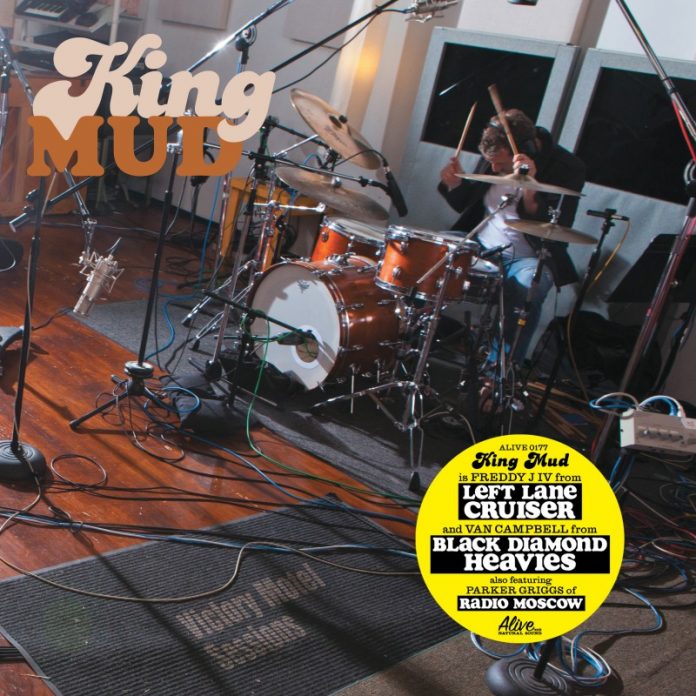 MVM has never been to Burbank, Los Angeles. We’ve also never been to the Victory Motel that is located there either. But unless successive US television shows have lied to us, we kinda hope that in one of its rooms there’s the local hooker turning tricks (see, we might be English, but we know the lingo). In another there’s a mobster on the run from the Feds and if not, at the very least there’s someone who is coming down from a meth related three day bender.

But then, even if instead it’s the sort of five star place you’d take your grandmother for tea, then at least King Mud have turned it into a fleapit for forty or so.

The key to KM’s fabulousness is as downright primal as the music they make. The band is a two piece featuring Left Lane Cruiser man Freddy J and Van from Black Diamond Heavies. The former released an album last year charmingly entitled “Dirty Spliff Blues” and the latter are about the only band who can outdo them from grime soaked blues. So put em together and something wonderful might just happen.

Put simply “Victory Motel Sessions” is what would have happened if instead of selling the Devil his soul at the crossroads, Robert Johnson sold him drugs, it’s glorious, it’s fuzzy and its filthy. Dip into any of its songs from opener “Rat Time” – which appears to be about some carnal desire or other that it’s best not to think about – to its follow up, the rather explanatory “Smoked All My Bud” and the thought remains the same: damn, delta blues ain’t usually like this.

King Mud have the knack of making everything sound dirty. “Back It Up” seems to be a bootie call gone wrong and the wonderful harmonica driven “Arthur’s Hooked” adds a fair old dollop of soul, but you still worry for the woman they want to “roll and tumble” with.

What they also do is write brilliant hooks. Big old, swinging slabs of Blusey rock n roll like “Keep It Out Of Sight” and almost punk takes on the genre like “War Dancers” which rattles along at 150 miles an hour – probably while drunk.

There’s even what passes for a love song here, “I Can Only Give You Everything” with its vocal harmonies is very nearly sweet, and there’s time for a jam too, as “Suzie’s Cookies” attempts to reprise most of what’s gone before.

And like “Blood River”, its head on collision of a closing track, “Victory Motel Sessions” is not complicated in any way. This is two men playing music for nothing other than the fun of it, and shouldn’t all music be like that?

Although, granted if King Mud were in the room next to you, you wouldn’t have had much sleep.