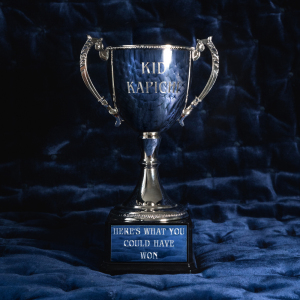 When that evil Tory bastard (my website, I’ll write what I want) Kwasi Kwarteng (probably) stopped sniffing coke (sue me, go on, you prick) long enough to give himself a tax cut while bending the poor over for rich people’s amusement last week, something happened that sums up “trickle down” politics.

I was sat at work when the “mini budget” was announced – so I was pissed off anyway – when someone said “What’s the fuss about? I couldn’t care less if the rich pay less as long as I get more”.

I didn’t say anything. Read the intro. Imagine how much I wanted to.

The words of “A New England” (not the Billy Bragg one, the opening song on “Here’s What You Could Have Won”) were ringing around my head. “Is it you can’t change, or you won’t change?”

That track came out a few months ago, and two words caught my eye: Bob Vylan. We love those boys around here and Bobby does his thing. There’s an incredible couplet in his bit too: Too much spice, less British bacon butty/Worry about your neighbours and worry about the druggies/And not the Eton graduates that’s taking all your money.”

Right. That shit alone is enough to get Kid Kapichi a fan for life. The thing is, the rest of this is just as stunning. “Rob The Supermarket”, scrappy indie punk is the best song about shoplifting there’s ever been, it’s juxtaposed by the other side of the coin. The mind-numbing drudgery of working life. “round and round and it never stops” goes “Five Days On (Two Days Off)” and it taps into the righteous, yet ultimately helpless, anger of the rat race.

“I N V U” adds a funky, dance element to things. Sort of like Dinosaur Pile-up doing MDMA, it imagines a world where the rich think we want to be like them. The problem is, many do.

Look, my world view is clear (and wait to you get to the conclusion!) but these songs are so good that you could probably enjoy the likes of “Super Soaker” without giving a toss about what’s being done to you every day. Catchy, punky, spiky, it gets in your head and doesn’t leave.

Where Jack Wilson spits his lyrics usually, there’s a real melody to the acoustic “Party At Number 10”. The sort of thing the aforementioned Billy Bragg should still do, it was good enough to get Liam Gallagher to personally invite KK to open for him at Royal Albert Hall. It’s a fabulous slice of acerbic stuff.

Wilson and Ben Beetham are a formidable pair of guitarists too. Their riff on “Cops And Robbers” has a Puppy type air, but its done with an air of threat too. Yet, there’s a depth too. This isn’t a one trick pony of a band “Tar Pit” hints at it, and the brilliant ballad “Never Really Had You” is an indie anthem if ever there was. There’ll be blokes all over the place that thought she was “the one” that will feel its pain. It’s just that what this band does, better than most, is deliver a velvet glove followed by a knuckle duster. KMFDM and their industrial edge would be proud of “Smash The Gaff”. There’s a flavour of violence, of taking back what they stole everywhere you look here and its never more to the fore than on this one.

“Special” is a bitter attack on 2022 Britain, it could have been conceived in  one of the lockdowns that we had to abide by while “they” partied and let the bodies pile high, “people shaken to their core, they don’t feel special anymore,” or it could be about how they’ve tried to destroy us since and the consequences: “In a battle with my thoughts…..” and anyone who suffered, gets it. And they’ve got Kid Kapichi in their corner.

The death of The Queen and “The Queue” proved that British people love to be told who their “betters” are. That’s why the queue jumping of Phil Schofield and Holly Willoughby was so perfect, because everyone in that line deserved to have elitism shoved in their stupid faces.

For everyone else: Here’s What You Could Have Won, if you’d cared about the many and not the few.