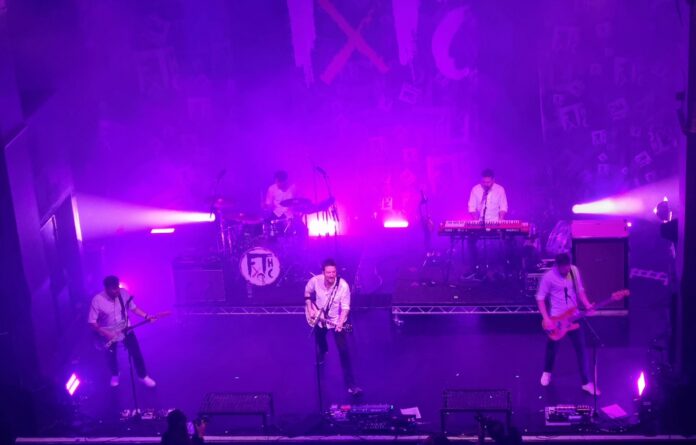 There’s a moment here. Luckily it happens in the third song, sometimes in his shows its later. When Frank Turner makes me question my life choices. He’s doing “Photosynthesis” and he gets to the line about “wasting 50 years away on something that you hate” and – I’ll bet at this point I am not the only one – I think about handing notice in the next day. I never do, of course, but for that briefest of brief moments Frank Turner makes you free.

Its what he does. More than once here, he asks, “are you on my team?” and its one of the easiest questions in the world to answer (easier than “how did Liz Truss get to run a country, she surely can barely run a bath?” for sure).

This is Frank Turner’s 2690th show since he started doing this here shizzle. I reckon I’ve seen about 12 of them in his various guises and I can categorically state that being “with” him, is not an issue. In fact, there is not an artist who carries his audience with him quite like this. He calls the audience “friends”. For once it doesn’t sound like total bullshit.

It’s a breakneck Frank Turner and the Sleeping Souls tonight. “Four Simple Words” comes in with its line about “I want to dance, I want to dance/I want lust, and love, and a smattering of romance”. That seems to sum up his thoughts throughout.

He’s got a new album out “FTHC” was a return (broadly) to his punk rock roots. “The Gathering” its celebration of life, feels right here. His ninth solo album is one of his best, and “Punches” thunders as if to prove it.

But the other eight were superb too, and they’ve always sounded better live. “Losing Days” hasn’t been played for ages, it is here. As an example of his songwriting, though doing “I Knew Prufrock Before He Was Famous” followed by its de facto sequel “The Resurrectionists” is a fine one. This is an artist who writes his life in his songs, and here’s a band that has a mastery of how to play them. New Drummer Callum Green has slotted in perfectly and the Sleeping Souls in general are in top form.

There’s some folk overtones to “If I Ever Stray”, but there’s a real high point when he does “A Wave Across A Bay”. A song about the suicide of his friend Scott Hutchison of the band Frightened Rabbit, it is a celebration of life too. It is a beautiful moment.

There’s another in the short acoustic section with “Untainted Love” a track to explain to his wife why he craved drugs, and as “The Road” and “Be More Kind” round that bit out, you are left wondering how a piece about the world losing it’s mind has more prescience now than when it was written. That’s Tory Britain, I suppose.

The band return and in the next three, collective jaws must drop, surely? “The Way I Tend To Be” has a touch of arena rock about it (and it always seems that’s where Turner is headed, but maybe he just loves playing these club gigs so much?) “Non Serviam” is the most punk thing he’s done in years, decades even, and “I Haven’t Been So Well” gets bonus points for sounding like Thin Lizzy and the mighty Hold Steady all at the same time.

A celebratory “Get Better” ends the set and the way he’s got the Institute jumping is a sight to behold, before he returns solo for “The Ballad Of Me And My Friends” and the band join for the usual race through “Recovery” and you can’t help but think of the line “one day this will be over” and embrace the hope it contains.

“Try This At Home” and “I Still Believe” end it, and its “…Believe” that most explains the enduring power of Turner. “Who’d have thought, that something as simple as rock n roll could save us all?” he sings and, maybe that’s what’s gone on here. Maybe we all came to the show with various struggles, and maybe, over an hour and 45 minutes, those issues lessened just a little though the power of Frank Turner And The Sleeping Souls.

They were a phenomenon here, frankly.