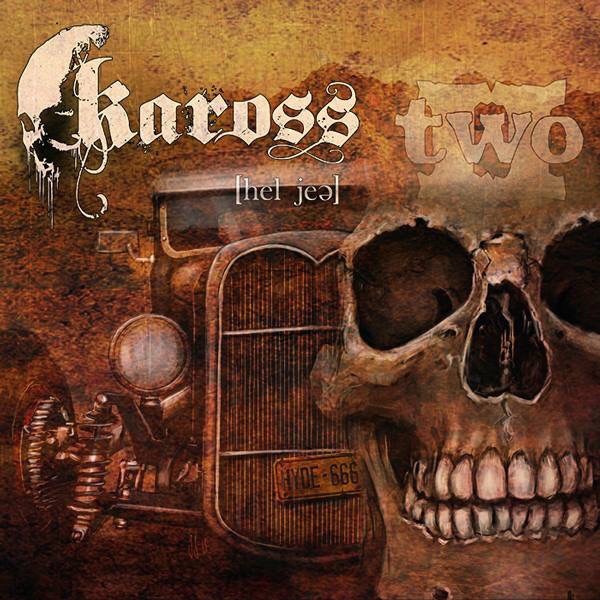 There’s a lot to like about Kaross even if you never heard a note of their music. The band photo shows you a band that looks like they are no stranger to riffs and late nights, the album title – guess what, it’s their second album – is one of a band that doesn’t do frills, thanks very much, and then there’s the last line of their Facebook bio: “Listen To Kaross”, it’s says. “Your crotch will thank you.”

MV will have to resist the urges and the stirrings in the trouser area, because the real story behind the band is a bit less straightforward than that. This is a re-release of their 2013 record, which was plagued at the time by departures from the band and label issues.

Getting a proper airing now, ahead of a couple of a singles and a new album planned for later in 2016, this a record well worth checking out if you missed it first time around.

Citing the kind of influences that are guaranteed to get MV…. urmmm….excited, Kaross more than make good on their claims to be for fans of bands like Red Fang and Monster Magnet.

Things begin with “Burn Witch Burn”, which like the aforementioned understands that riffs need to be a little bit chunky, a little bit fuzzy and heavy if you fancy it, sure. But that doesn’t mean that they have to be inaccessible. Admirably clean vocals are used throughout too, meaning that the record never touches the kind of extremities that this type of affair sometimes thinks it needs to.

Thus the song is king here, “Borderline” throbs and pulses, and “The Lake, The Beach” might have a happy enough sounding title, but behind its Corrosion Of Conformity type stylings there beats a real dark heart.

That, though, is one of a clutch of songs that see guitarist Kalle Sjostrand take centre stage, his work here is exceptional and takes the album to another level. The downtuned thud of “The Evil” is built around one of his riffs and is superb, while the title track is a real high point.

Indeed there’s barely a week point here. “I Call The Shots” isn’t one to argue with either, and chucks a kind of “Facelift” era Alice In Chains feel into the mix, while “All Cream Is Gone” is just a heads down swirling freak out of a thing.

The counter balance to all this is “Hyde”. Built around an ominous bass driven riff it appears ready to summon all kinds of hell, before settling instead for crushing everything in its path and going back to salt the earth.

A record that starting with a bang and had a few explosions along the way, ends with a hangover – as you’d guess a lot of parties do around the Kaross boys. The pummelling “Dirty Beer” might begin with a Ghost-like chant but returns to the theme of being somewhere in the middle of CoC, Soundgarden and AIC with something approaching glee.

It’s repeated refrain tells you everything you need to know about this record. “These words are not my own, but I’ll say them anyway” sings Magnus Knutas. If this suggests that he knows the record isn’t the most experimental or groundbreaking around, then you bet your life it’s great fun.