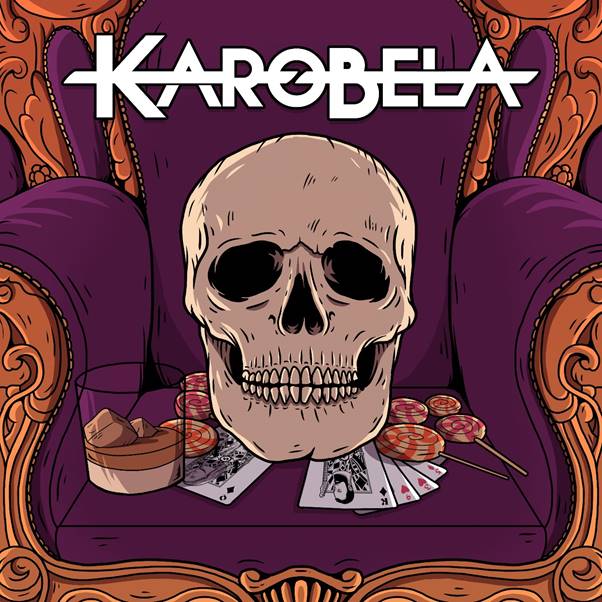 If your debut record should be about intent, then Karobela’s drips with it. Towards the end, there’s a song called “Good Luck Trying”. Full of Royal Blood type swagger and arena intent, singer Lauren Diamond sings the line that defines the band.

Just before the chorus it goes: “I know just where I want you, so I am taking you there….”.

The inference is clear. Karobela aren’t here to mess about, waste time, prevaricate. They’ve decided it’s their time, so its their time. And that’s it.

Back in November last year I had the Faversham quartet on as band of the day on the site. I was struck by a sentence in the biography. “They landed a slot at Camden Rocks without having a song out.”

Listening to these six, you can see how, simply put there is an ambition about them. A desire.

The six tracks are bookended by two versions of “Candy”. The first one is a kind of punky, modern thing, full of harmony and hooks. The last one “Candy (Unwrapped)” is even more interesting in a way, with its piano, and sparse percussion. It hints at a band that is nowhere ready to reveal its full hand.

“Liquor Heart” scratches the surface of something kind of primal, there is a glam rock sheen about this, and a definite crossover potential in the music. “Don’t need a man to take my hand,” offers Diamond – who is a forceful focal point for this – and its not a million miles from “Take Me Out” era Franz Ferdinand in the way it builds, although Rob Freeman’s guitar solo is pure hard rock.

“Skin And Bone” was the single I had on back in November. Trashy, punky, and with enough swagger to see it home, “you deal kings? I’ll deal aces” goes its hook, as though they’ve never given a thought to being second in anything, and “No Mercy” is the one that you can imagine finishing the live shows. I’ve tried to avoid comparison to the likes of The Pretty Reckless for it being obvious, but as this one shakes you once more, you really have to recall them.

The thing they show on this EP, however, is that there is enough individuality to suggest Karobela will continue to develop in the coming months and years. As debut EP’s go though, this is very much one of the type that says: “Forget potential, we’ve arrived, get out of the way.”