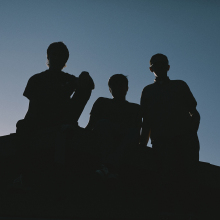 Joyce Manor are an indie / punk / pop rock band from Torrance, California who formed in 2008. They are in essence a three piece who comprise of vocalist/guitarist Barry Johnson, bassist Matt Ebert and guitarist Chase Knobbe. They release their sixth studio album `40 oz. To Fresno`, an album that has songs that span the last eight years this month and have employed Tony Thaxton on drums who plays with post punksters Motion City Soundtrack.

The album opens with a cover of British electronic band Orchestral Manoeuvres In The Dark first hit single from 1981 `Souvenir`. This is a completely reworked version that I have to admit was really catchy. We have a punk tinged number in `NBTSA` or Never be the same again that races along at 100 mph apart from a brief respite in the latter section. A song that will have you singing along to it.

We have a more dreamy outing with Reason To Believe` with vocals that seem to have a slightly questioning delivery. A thumping drumbeat and grinding guitar chords lead us into and along the whimsical `You`re Not Famous Anymore` a tongue-in-cheek look at the perils of youth stardom according to the band.

`Don`t Try` is a delightful but all to brief melodic indie rock out while I thought `Gotta Let You Go` was quite anthemic.

Dance With Me` is a fairly upbeat love song with churning guitar riffs, wonderfully enjoyable with a brief guitar solo on route and a fleeting section with just vocals shared over a drum beat and bassline. According to the band `Did You Ever Know` sees Johnson capturing the nostalgia of a teenage crush which by the sounds of it, he hasn`t fully gotten over. There are some nice vocal harmonies shared throughout this sentimental youthful longing.

This release closes out with `Secret Sisters` which was, from what I read, a B-side from 2014’s `Never Hungover Again`. It`s a grinding quite hypnotic noisy almost shouty piece.

There was much to enjoy on `40 oz. To Fresno` which has enough variety to keep you listening and running at around seventeen minutes in length there`s no excuse for not giving it a few blasts. I have to admit I was unaware of Joyce Manor but this release has really whetted my appetite and I’ll be spending a little time exploring their back catalogue.