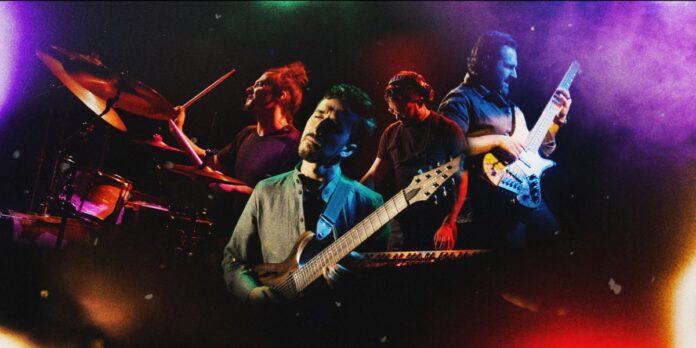 Chicago instrumental progressive quintet Outrun the Sunlight have streamed a live video for their track ‘Emerald Joy’ and announced the release of their most recent album A Vast Field of Silence via Dunk!Records.

The band comment: “We’re so excited to share that our new album is now available on vinyl in Europe thanks to the good people at Dunk!Records. To celebrate, we wanted to share our first live recording since the release of our new album. We performed at the iconic Chicago venue, Reggies, and had it filmed by Jordan Nelson and edited and mixed by our guitarist, Austin Peters. This video also marks the debut of our live guitarist, Konstantine “Ken” Stebliy, who we’re so stoked to be working with.”

A Vast Field of Silence is the Chicagoans fourth LP, and four years in the making. The thematic record is a wordless concept album, based around a recurring melody appearing throughout. Most clearly stated in the album opener ‘Awareness’, the beautiful theme is typical of Outrun the Sunlight, an unusually cinematic and compositionally-heavy group in the genre.

Although anchored to the theme, A Vast Field of Silence is a satisfyingly surprising record, one that is a journey of a listen. Going beyond simply instrumental progressive, the band incorporate elements of acoustic ambient, jazz, post-rock, and metal. Bearing comparisons to Cloudkicker, The Contortionist, and Russian Circles, A Vast Field of Silence is Outrun the Sunlight at their best.

The band have a huge depth and range of musical talent at their disposal: Kyle Kunkler (keys) is a professional dance piano accompanist (ballet, modern, and more) and composer, and custom-coded a majority of the synths heard on the album. Luke Angle (drummer) is a professional music instructor, from big-band jazz to math rock via country & western. Phil Kalas (bass) is also a composer, under the name Asleep In The Stars, while guitarists, Cody McCarty and Austin Peters formed the group in 2011, and have known each other since playing together in high school bands from 2008. Austin, aside from Outrun the Sunlight, has also practiced embodiment meditation since 2017, and is the founder of “Simple Being”, which produces recorded meditations with voice and ambient music.

With forming in 2011, the band released both Architecture of the Cosmos EP and debut LP The Return of Inertia in the same year. Signing with Rogue Records America in 2012, the duo re-released The Return of Inertia (Vocalist Version) which included vocalists from around the world, plus two bonus tracks. In 2014, the addition of drummer, Pedro Villegas, and bassist, Connor Grant, brought the band to the stage, and they released their second album Terrapin also on Rogue Records. In August 2015, following the release of Live at Electrical Audio EP, the group toured in the east coast United States with Native Construct (Metal Blade Records) and Wings Denied.

In 2016 Outrun the Sunlight went on to perform on Chicago internet music series, Audiotree, releasing the live album Outrun the Sunlight on Audiotree Live. They then released Red Bird independently in 2017, their third LP, the first instance that the group performed together on an album. A band not content to rest, they then released a live in-studio record, Emerge, in January 2021.

With the Covid-19 interruption and introduction of a new drummer, Outrun the Sunlight‘s newest LP has eventually been four years in the making, from first conception ’til release – but well worth the long wait.

Outrun the Sunlight are: