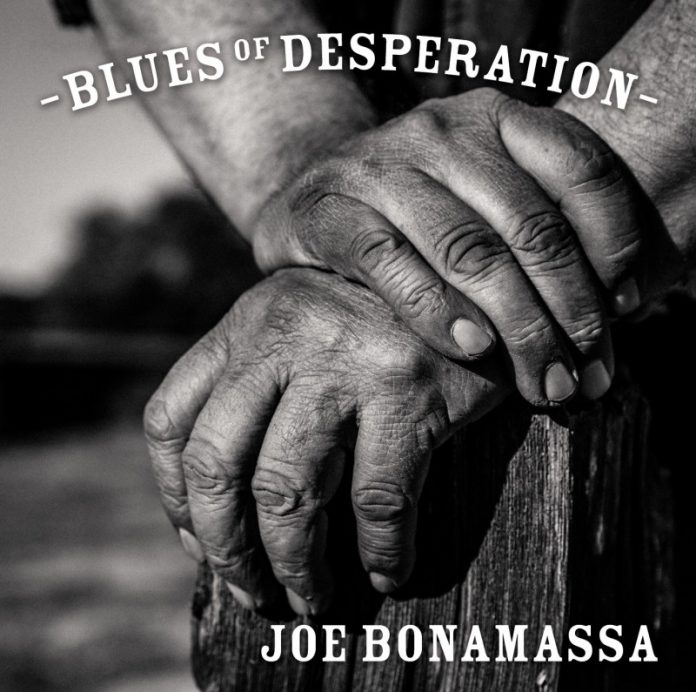 Joe continues his pursuit of perfection

The ten year UK journey that took Joe Bonamassa from a tiny little club in Poole, Dorset to the biggest arenas there is, summed up his career in microcosm. Here was the man who has done more than anyone to make the blues, well, cool again. And he’s done by being true to both himself and the old school legends of the genre.

But that decade at the top inevitably leads to some kind of self reflection. In the build up to the “Blues Of Desperation” Bonamassa has spoken of evaluating everything and stripping his sound down to the only things that mattered. He talked of evolution, but in truth everything about him has been geared to that anyway, so whilst “……Desperation” feels different, certainly from the wonderful “Different Shades Of Blue” – his last solo record – don’t go thinking that this is a major departure.

What this 11 tracks actually deals in, rather than revolution, progression, and one that is the most wonderful thing you can possibly imagine. Like its predecessor it’s all original tracks, meaning that the covers that formed large swathes of the early material are gone, and if that means Bonamassa stretching himself as a songwriter, then you wonder why he didn’t do it sooner, because like with pretty much everything he does touches, he’s found gold.

“This Train” kicks things off in pretty raucous fashion, with keyboardist Reese Wynans supplying some fine piano to give the whole thing a bar room boogie flourish. The record feels a touch more raw than some of Bonamassa’s work and the brilliant “Mountain Climbing” – which possesses a mighty groove and drumming from Anton Fig and Mark Douhit that shakes the foundations – is more more akin to his Black Country Communion material.

Perhaps the nature of the recording sessions had to do with the urgency here. Producer Kevin Shirley oversaw the sessions as normal, but the 11 songs were completed in just five frantic days. It’s seems to have been a fertile breeding ground too, as the claustrophobic “Drive” with its dark overtones appears to embody the “try anything” feel, and the hammering hook of the title track is worthy of buying the album on its own.

A record that truly explores the limits of what this incredible group of musicians can achieve, the soulful shimmer and almost gospel overtones of “The Valley Runs Low” is sure to become a favourite, and just in case you thought he’d forgotten how to do a bluesy shuffle, then “You Left Me With Nothing But The Blues” disavows that theory in four and a half glorious minutes.

There are some truly classic moments here. “How Deep This River Runs” is a majestic piece of hard rock, the Jazz thrills of “Livin’ Easy” are just great fun and the perfect old style blues ‘n’ horns of the closing “What I’ve Known For A Very Long Time” give the album a timeless feel of its own.

The collection’s most epic moment comes towards the start and “No Good Place For The Lonely” is an harrowing trawl through misery, during which Bonamassa allows himself the room to really cut loose on his guitar, playing a solo of immense dexterity, it’s almost as if here he’s saying to the listener, “I could do this whenever I wanted but the song is key this time.”

In truth, we already knew this most talented of men could do anything what he wanted. “Blues Of Desperation” is merely just confirmation of that. It’s also a career high, and given this particular career that makes it truly immense. What this record proves, once and for all, is its time to stop talking about Joe Bonamassa as being the King of modern blues. He’s one of the all-time greats.