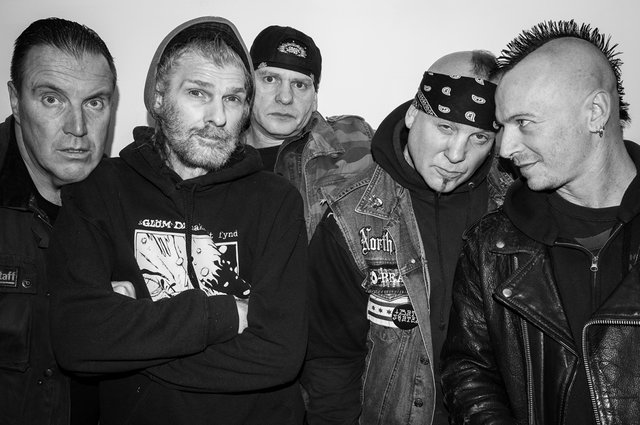 UK-based crust legends Discharge announced their signing to Nuclear Blast late last year. After the release of their ‘New World Order’ EP, the time has arrived to finally unleash a new studio album (their first in over 8 years) on an unsuspecting world.

The new album is titled ‘End Of Days’ and will be released on April 29th. Discharge’s influence on the metal scene is undisputed. Their 1982 debut album ‘Hear Nothing See Nothing Say Nothing’ is constantly cited as a classic in extreme music while the likes of Metallica, Anthrax, Sepultura and Machine Head have all covered their songs.

Today, Discharge have released new track ‘Hatebomb’ as a digital single.
The track is available as an iTunes instant-grat if you pre-order the album (see link below):
https://itunes.apple.com/gb/album/end-of-days/id1087935707

Discharge commented on ‘Hatebomb’:
“No thought provoking lyrics on this song, just 2 minutes and 8 seconds of anger, play it loud!”

The band also recently released the lyric video for ‘Hatebomb’ which you can watch here.

Check out the official video for the song ‘New World Order’ here.

Pre-order ‘End Of Days’ on Limited Edition White Vinyl or as a Limited Edition T-shirt and CD bundle exclusively from the Nuclear Blast UK store: http://bit.ly/DischargeStore​

Or alternatively, pick up the CD or standard vinyl from Recordstore to receive a hand-signed insert with your order: http://bit.ly/DischargeSigned