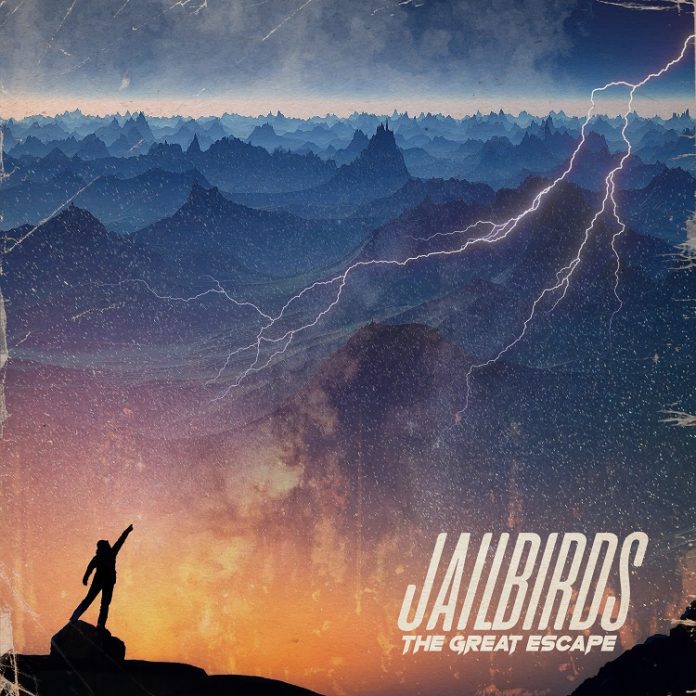 If you’re anything like me, when you were at school, here was the first week. You’d go in thinking you were going to be different, this year you were going to apply yourself. By the Friday, you had remembered the same old thing was actually much more fun.

There is a bit of that here, with Jailbirds.

“The Great Escape” kicks off with its title track. Some Celtic, folky guitar and a sort of grandiose bass line usher it in. Then at 52 seconds in it remembers they are Australian and rips out a riff that is equal parts Rose Tattoo and Airborne.

And what’s wrong with that? Nothing, to be honest.

Except I am being slightly disingenuous, because half of them are actually Irish. The band are based over there – and when towards the end of the opener it disappears down some NWOBHM guitar solo, you have to admit there is plenty going on here.

And all of it good.

There is a brilliant catchiness about “Loose Cannon” and harmonies that deserve a hit single – not to mention a hook that goes “I am a little crazy, but you know I am kinda sweet”, as if to demonstrate they aren’t quite the bad boys of rock n roll.

Indeed, as I have often argued all great hard rock should have a hint of AC/DC about it. “Nothing Good Lasts Forever” does, except these scamps like to mess with you, and one minute it doesn’t. It sounds like Saxon instead.

All of this is why Jailbirds are better than most “new” Classic Rock bands.

“Shadow Of Love” is probably the best of the lot. Sort of like Joel O’Keefe fronting ZZ Top, it actually expects you to believe that the girl who is the subject of the song is “leading me astray”. No one here needs any help to be honest.

“Thrill Of The Chase” is so gleeful that it just seems to happy to be out of the house. This is why you travel around the world – and it is an anthem to themselves. “There’s a road where I can find my way to the top with my brotherly crew” sings Axel McDonald, and you know what? You are so far on their side that you wish them well.

“Underdog” furthers the idea that they are on a crusade, with a kind of blues stoicism that may well be up for a scrap in the back alleys if it had to get down and dirty. While “The Pilot” wraps its anti-religion message around a tune that any of the Aussie greats would be chuffed with.

“Fight Or Flight” not only wraps up a short and sweet record (if you have got eight great songs then why pad it out?) it does so with the air of something that if you see them at a festival this summer, you’d be texting your mates to tell them you’d seen something that was going places. But one also that has risked everything to make their dreams come true.

This is – first and foremost – great fun, and second, played by a band that you suspect, where they not in the band, would be in the crowd watching one just like them. And that is inescapable.